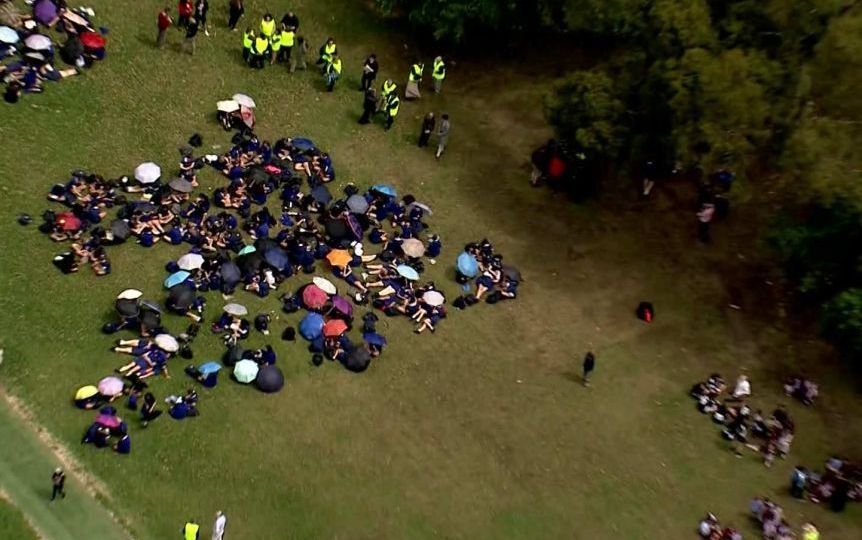 The teen is thought to have copied a similar stunt, which saw 20 high schools evacuated. Photo: ABC News

A teenage boy is expected to be charged over a copycat bomb threat made to a school on Sydney’s lower north shore last week.

Hundreds of students were evacuated from North Sydney Boys High School on Falcon Street after it received a threatening phone call on Thursday.

NSW Premier Gladys Berejiklian confirmed the security scare happened just before some HSC students were due to sit their final modern history exam.

Teachers and students made their way to a nearby oval as specialist police were called in to check the buildings for explosives, although nothing was found.

A source close to the investigation has confirmed the teenage boy arrested is a student at North Sydney Boys High School.

Cybercrime detectives arrested him, seizing his mobile phone and a computer during raids on his home in the city’s south early this morning.

The student was taken to Kogarah Police Station, where he is currently being questioned by police over the security breach.

The copycat threat was made just days after criminals from eastern Europe sent a series of threatening emails to more than 30 schools across the state.

Thousands of HSC students were forced to abandon their exams as schools were evacuated.

NSW Police Minister David Elliott said he couldn’t understand why anyone would want to cause any further disruptions to schools.

“It certainly takes a small and demented mind to interrupt HSC students after a traumatic year during a pandemic when the nation is at a heightened state of alert in terrorism,” he said.

“I’m horrified an individual or individuals would find themselves so bored that they would want to disrupt this very important part in these children’s lives.”

Last week Ms Berejiklian warned that a hefty penalty would apply to any copycats.

“The police will come down on you heavily if anybody poses any threat at all to the safety or the wellbeing of our students,” she said.

“Haven’t the students of 2020 been through enough? The last thing they need is this.”

The main exams affected were legal students and visual arts, but most afternoon exams went ahead as planned.

NSW Police are working with the Australian Federal Police and their oversees partners to track down the culprits behind the mass email threats.

As investigations continue, police said anyone caught making any threats will face the full force of the law, which could include jail time.