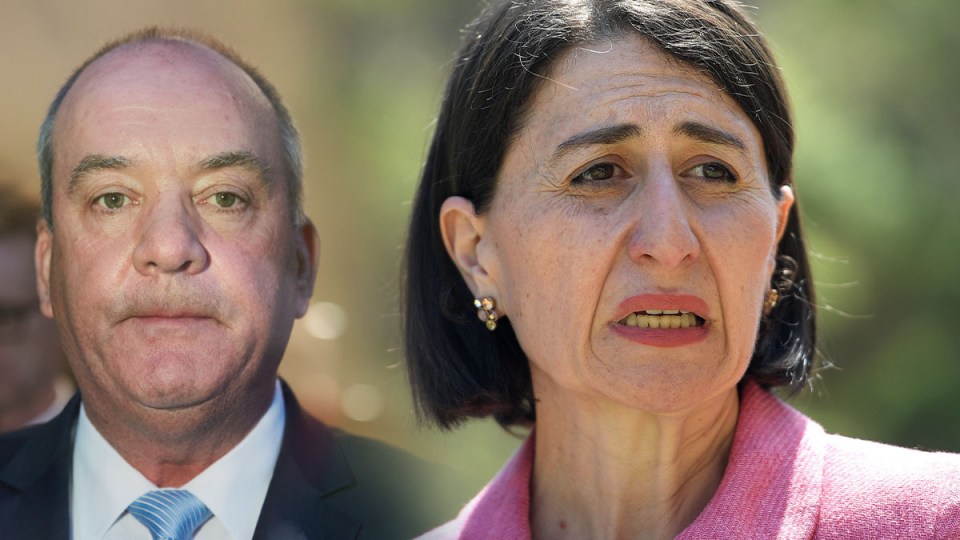 Gladys Berejiklian is under increased scrutiny after this week's revelations at the NSW ICAC inquiry.

Disgraced former Wagga Wagga MP Daryl Maguire admitted to the ICAC he organised a “drop-in” between a property developer and the NSW Premier in 2017, after the men had “a couple of drinks.”

Mr Maguire, who was in a secret relationship with Premier Gladys Bereijklian at the time, described the meeting between property developer Joseph Alha as short and informal. It came after Mr Maguire had invited Mr Alha to his office for “a glass of red”.

The disgraced former MP admitted the pair had “had a couple of drinks” at the time.

He claimed Mr Alha “was insistent on saying hello” to the Premier, and that the developer had been “frustrated” with planning issues relating to a development.

Mr Maguire said the meeting lasted “probably less than two minutes”, but he couldn’t remember the exact discussion that occurred beyond “general niceties”.

After several questions from counsel assisting, Scott Robertson, Mr Maguire admitted that the possibility of meeting Ms Berejiklian or visiting her office was “at least a factor” in the timing, location and circumstances of his meeting with Mr Alha.

“I can’t say that was the driving purpose, but yes,” Mr Maguire admitted.

He claimed such “drop-in” meetings were common in state parliament, happening “occasionally”, and that he had done similar introductions with other premiers.

Ms Berejiklian and Mr Alha had met previously to the 2017 “drop-in”.

Asked about his “close personal relationship” with Ms Berejiklian, Mr Maguire said it had ended in “August or September sometime”. He claimed it had been “on again, off again” from 2015 until that time.

Regarding some business deals and the general problems he faced, Mr Maguire said he would “run it past her”. A secretly recorded phone call between the pair revealed Mr Maguire had told her about “bad debts” he had, and mentioned “the Badgerys Creek stuff”.

That was understood to be a reference to a business deal to sell $300 million of land near the site of the new Western Sydney airport, owned by racing heir Louise Raedler Waterhouse. Mr Maguire said he believed he could be in line for $1.5 million as part of a possible deal.

The admission came on Thursday morning, early in Mr Maguire’s second day of evidence at the ICAC inquiry. He is expected to be grilled for the entire day on Thursday, and potentially into Friday also.

Ms Berejiklian’s leadership remains under enormous pressure after she revealed their secret relationship during her evidence to the probe earlier in the week.

Mr Maguire was sacked as an MP in 2018 but his relationship with Ms Berejiklian did not end until earlier in 2020.

Earlier on Thursday, one of Ms Berejiklian’s top lieutenants admitted she was in for another tough day at the office as Ms Maguire continued his evidence to the state’s anti-corruption body.

“Today is a tough day. There is no denial of that and we will move on from there. But she is a great person, a great leader,” Transport Minister Andrew Constance said.

Mr Constance reiterated his staunch support for his leader, saying she was an innocent victim of Mr Maguire, who fooled many around him.

“I am not nervous because I know Glad has done nothing wrong. She is an incredible leader,” Mr Constance told the Nine’s Today show.

“She has been dragged into this. Not of her making. Very innocently, I mean, she was in a close personal relationship with him. She didn’t know the extent of his activities like we all didn’t.

“That is the tragedy here for her, at a personal level,” he said.

Attorney General Mark Speakman said there was “100 per cent support for Gladys in the Parliamentary Liberal Party”.

“She is the best premier in Australia. We have seen a one-in-100-year COVID pandemic. She has handled that magnificently,” he told ABC TV.

“This ICAC investigation is into Daryl Maguire, it’s not into Gladys Berejiklian. She is not a person of interest. There is no allegation made by ICAC against her, that she has breached any statute or any ministerial code,” he said.

After a bruising debate during two opposition no confidence motions on Wednesday Ms Berejiklian managed to survive – with the vote in the upper house tied until the chair cast his vote.

Opposition Leader Jodi McKay is expected to continue her attacks, accusing the Premier of turning a blind eye to corruption.

Ms Berejiklian is hoping to tough it out after making it clear she is prepared to dig in to hang onto her leadership.

“Never, ever have I tolerated anybody else doing anything wrong. And if I ever saw it or witnessed it or knew about it, of course I would have taken action,” she said.