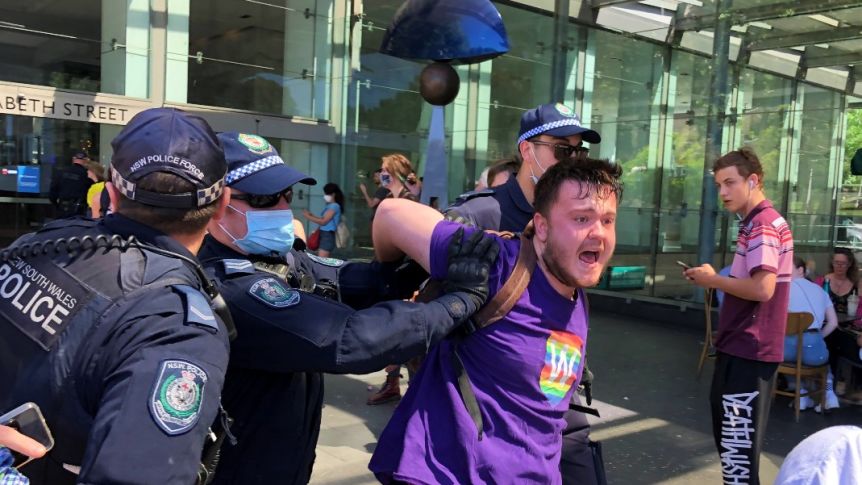 Violent scuffles have broken out between demonstrators and police at an unauthorised protest for transgender rights in Sydney.

Event organisers claim dozens have been arrested and fined after the protests ramped up when police attempted to disperse the crowd.

More than 300 people protested against a proposed anti-transgender law, despite the NSW Supreme Court ruling in favour of a police bid to shut it down to prevent the spread of coronavirus.

A number of people sustained minor injuries after the tussle broke out when the crowd marched from Taylor Square to Hyde Park.

Activists are marching in protest against an anti-transgender bill introduced to Parliament by One Nation’s Mark Latham.

Yesterday, police won a court order prohibiting the rally over a risk to public health, but activists claimed the ban was nothing to do with COVID-19 and social-distancing safety.

April Holcombe, from rally organiser Community Action for Rainbow Rights, said thousands of dollars’ worth of fines had been issued in protests to date, despite people being allowed to assemble on beaches, football stadiums and shopping centres.

Among the evidence presented in court yesterday, Acting Assistant Police Commissioner Stacey Maloney said that at previous Sydney events, most attendees did not wear masks or social distance.

But under cross-examination, she also conceded no rally in Sydney during the pandemic has resulted in COVID-19 transmission.