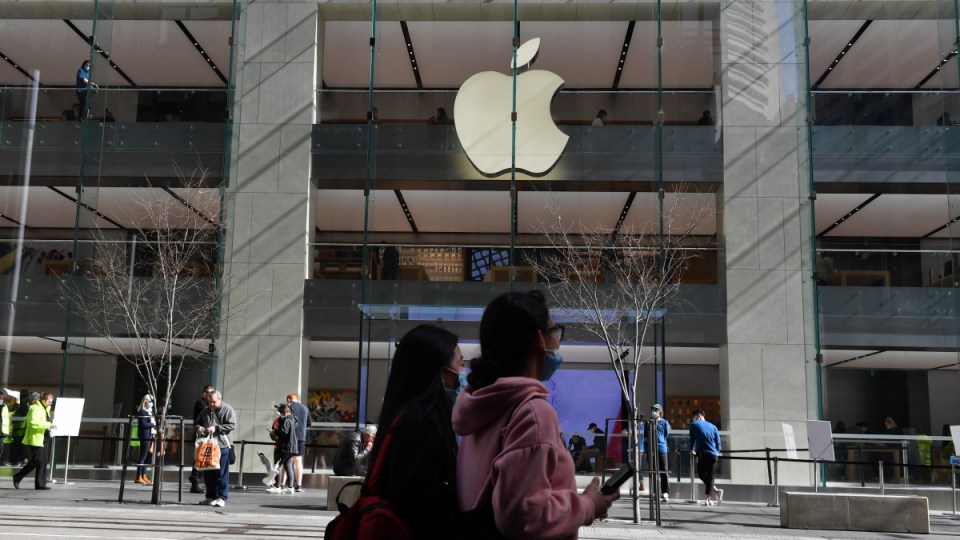 An Apple store is one of several new locations of concern as NSW reports five mystery COVID cases. Photo: AAP

Health authorities in NSW have warned a slew of new mystery coronavirus infections might have compromised several businesses in central Sydney, including an Apple store.

NSW Premier Gladys Berejiklian revealed on Wednesday there had been six new COVID-19 cases in her state in the 24 hours to 8pm Tuesday.

Only one was a returned traveller in hotel quarantine, meaning the source of the other five remains under investigation.

Warnings have been issued for several businesses in central areas, including a large office tower on George Street, a gym on Pitt Street and the Apple store at Broadway.

Another attended the Apple store at Broadway on August 22 between 3.40-4.40pm.

Anyone who was at these businesses has been warned to get tested and self-isolate if they develop COVID-19 symptoms.

Two of the new cases visited Sydney’s Tattersalls Fitness Club on August 19, 21 and 23.

Anyone who was at that venue at the same time is being warned they may have been exposed to the virus.

Dr Chant warned there could be new cases linked to those venues.

The five mystery cases are:

Dr Chant said a high school student had also tested positive for the virus after the 8pm reporting cut-off, and would be included in Thursday’s numbers.

He attended one of three schools that were closed on Wednesday for cleaning after possible exposure to cases: Riverstone High School, Wyndham College and Schofields Public School.

A further three students at those schools who returned inconclusive or negative COVID-19 tests have been swabbed again “out of an abundance of caution”, Dr Chant said.

Nearly 26,000 people were tested in the reporting period.

“Whilst we have been doing well the last few weeks, we are not out of the woods yet,” Ms Berejiklian said.

“Every day is a battle, every day we need to be vigilant.”