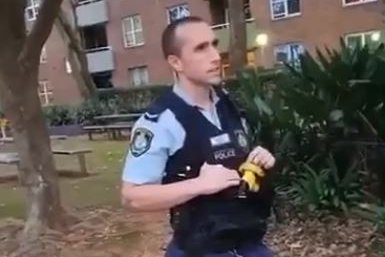 The officer involved in the incident has been stood down pending the outcome of an inquiry. Photo: ABC

NSW Police Commissioner Mick Fuller says the officer filmed kicking an Indigenous teenager to the ground during an arrest in Sydney this week “had a bad day”.

The incident, in which the officer kicked the 16-year-old’s feet from beneath him before dumping the boy to the ground, is the subject of an internal police investigation, to see whether excessive force was used.

The teenager, who can’t be named under NSW law, was arrested on Monday afternoon and was later treated at St Vincent’s Hospital for minor injuries before being released without charge.

Mr Fuller apologised to the boy and told radio station 2GB that the officer, who has been placed on restricted duties, could have handled the situation differently.

“Not for one minute am I saying the officer’s actions were correct,” he said.

“The fact that this officer doesn’t have a chequered history and he has been in [the police force] for three and a half years, if the complaint is sustained against him, you would have to say he has had a bad day.”

The sister of the teenager says the police officer involved should be charged.

The woman, who has not been named for legal reasons, said the constable’s force was “unnecessary and irresponsible” and that her family was feeling “anger and frustration”.

“We want to be able to develop better relationships between the police and the youth of our community, and this won’t happen if we allow officers to feel they are entitled to abuse us without facing proper consequences,” she said.

“This police officer must be charged so we don’t have to deal with another incident like this and I truly hope this is a turning point within our community and the police.”

‘We have a long way to go’: Berejiklian

The teenager’s sister, who also cannot be named under NSW law, told triple j’s Hack the footage made her angry and upset.

“When he came back home later that night, he was shaken up,” she said.

“He was very sore this morning and he was distraught.

When asked about the arrest, NSW Premier Gladys Berejiklian responded that “we still have a long way to go in our country”.

“What happened in the US is a good wake-up call for all of us, and I think that all of us have our hearts breaking as to what’s happening in the United States,” she said.

“We have to ensure that we can do what we can in our own country to protect all of our citizens.”

“Am I concerned about what I’ve seen in that footage? Absolutely, I am concerned, but I’m equally concerned about others who may use this footage to inflame it and turn it into something that it’s not,” he said.

Federal Liberal MP Dave Sharma said he was “alarmed and sickened” by the footage.

“Obviously, I would want the internal police investigation to do its job,” he told the ABC.

“I think anyone who saw the footage … can’t be but alarmed and sickened by it.”

Matter could head to criminal court

“Not only is this police conduct unacceptable, but it is downright dangerous,” Ms Lee said.

“This is a use of force in a scenario where force should not have been used.”

Ms Lee said the matter could be taken up in a criminal court, or become the subject of a civil case against the police if force was deemed to be unreasonable.

She said the conduct was damaging not only to the young person involved, but for community relationships in general.

“Aboriginal young people in particular are disproportionately policed not only in NSW but across Australia,” Ms Lee said.

“They are a very vulnerable crowd and it’s time that this particular type of police practice is put to an end.”

Officer who kicked indigenous teen during arrest ‘had a bad day’