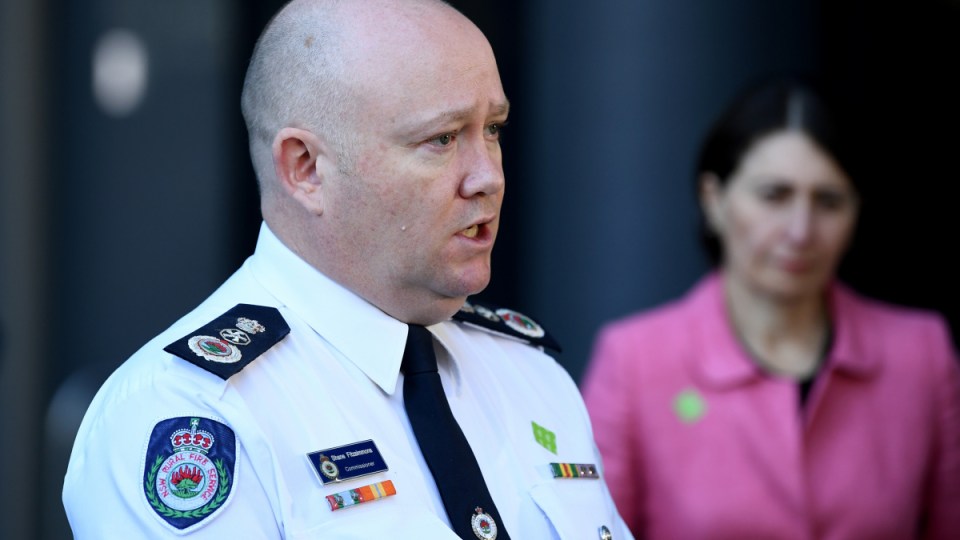 Celebrated NSW Rural Fire Services boss Shane Fitzsimmons is taking on a new role, heading up an agency aimed at ensuring the state’s resilience amid major challenges such as the coronavirus pandemic.

Mr Fitzsimmons said he would take up the job after making the “absolutely difficult and deeply personal” decision to quit the RFS.

Premier Gladys Berejiklian announced the establishment of Resilience NSW on Monday, saying it would ensure the state was prepared and able to respond to crises – “be it COVID, be it cyber security, be it a whole range of things we may not foreshadow”.

She said Mr Fitzsimmons – “one of the true heroes of NSW” – had decided to retire from his RFS position and would become the agency’s commissioner in about a month.

“Who would have thought that in 2020, NSW would be facing a pandemic?” Ms Berejiklian said.

“We don’t know the challenges of the future but what I do know is that NSW, through Resilience NSW, will be able to focus on preparing and recovering from anything that comes our way.”

Mr Fitzsimmons, 51, has been widely praised for his leadership during the horror bushfire season that has just ended.

He said the decision to step down as commissioner and move on to a new role was “absolutely difficult and deeply personal, but it’s the right one”.

“It’s been a privilege and an absolute honour to have served in this organisation alongside so many tens of thousands of wonderful individuals, and in particular a privilege to lead the organisation as commissioner for over a decade,” Mr Fitzsimmons said on Monday.

“I’ve seen very much this past season – the worst that mother nature can deliver, but I also saw the very best in our people.”

Mr Fitzsimmons said drought-stricken communities had been “belted by bushfires” only for the extraordinary COVID-19 impact to compound the situation further.

“I very much care about and am concerned for the people of NSW … and there is no doubt in my mind that I take on this new role with a deal of trepidation of course,” he said.

“But I’m very open to the idea of continuing to make a meaningful difference in the lives and livelihoods of people, of communities, to help with business, to help with industry, and to help rebuild our economy.”

He added that Resilience NSW would lead a whole-of-government prevention, preparedness and recovery effort, and oversee emergency management policy, service delivery and all aspects of disaster recovery.

Mr Fitzsimmons joined the RFS in 1985 and was appointed commissioner in 2008.

Emergency Services Minister David Elliott thanked him on Monday for his service.

“I don’t think there’s a single person who would disagree that Commissioner Fitzsimmons’ leadership was a beacon of hope during our State’s darkest hour,” Mr Elliott said.

He said Rob Rogers would take over the role of NSW RFS commissioner, after 40 years as a member and nine years as deputy commissioner.