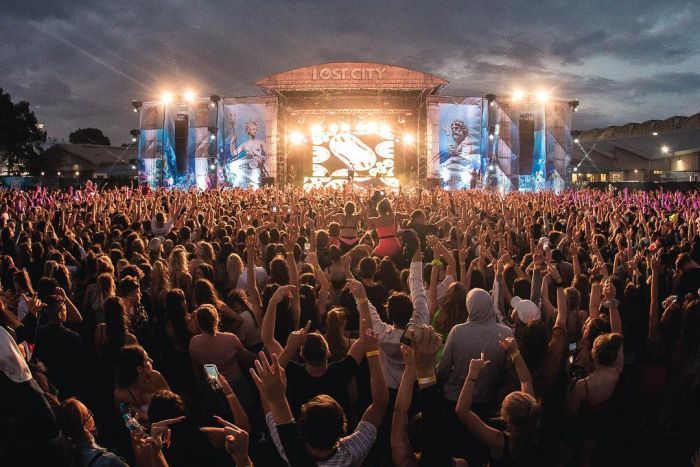 It is not the first time police have conducted strip searches at the under-18s festival. Photo: Instagram/Goodlife Presents

NSW Police say 11 children were strip-searched at an under 18s music festival in Western Sydney at the weekend, despite it coming under intense criticism at an inquiry into the practice.

A total of 44 children were searched at the Good Life, Lost City festival — an event for teens aged 13 to 17 — at Sydney Olympic Park on Saturday.

It comes exactly one year after police instructed a 15-year-old boy to expose his genitals as part of a strip search at the same festival.

Following complaints from the public last year, the state’s police watchdog began investigating the use by police of powers to conduct strip searches on minors.

The inquiry heard that police conducting strip searches on children was potentially unlawful.

Parent or guardian should be present for strip searches, lawyer says

Redfern Legal Centre’s Samantha Lee said if police were to strip-search a minor, they should ensure a parent or guardian was present.

“If they’re not going to have a parent or guardian present, then they must have a very good reason as to why that person isn’t going to be available,” she said.

Police insisted the strip searches conducted during Saturday’s festival were all done in accordance with the law.

However, legal experts have questioned whether children could be properly informed about their rights.

“In this circumstance, the festival did not allow a parent or guardian in to accompany the child, so it is unclear what information was provided to the child that ensured that fully understood the testing they were being subjected to,” Ms Lee said.

Police say a number of searches resulted in drug detections

At least 30 children were strip-searched at the same festival in 2019, but it is still not known how many were caught with drugs.

“What we know is that in the majority of strip searches absolutely nothing is found, and what we do know for sure is that strip searches are traumatic, invasive and … therefore should only occur as an absolute last resort,” Ms Lee said.

A 14-year-old girl and a 17-year-old boy were allegedly caught with more than 100 ecstasy pills.

Both were charged with supplying an indictable quantity of a prohibited drug, while the boy was also charged with possessing a knife in public and resisting police.

A 15-year-old boy was also charged with possessing a prohibited drug and breaching bail.

Police said a total of 14 teenagers were caught with prohibited drugs at the festival.