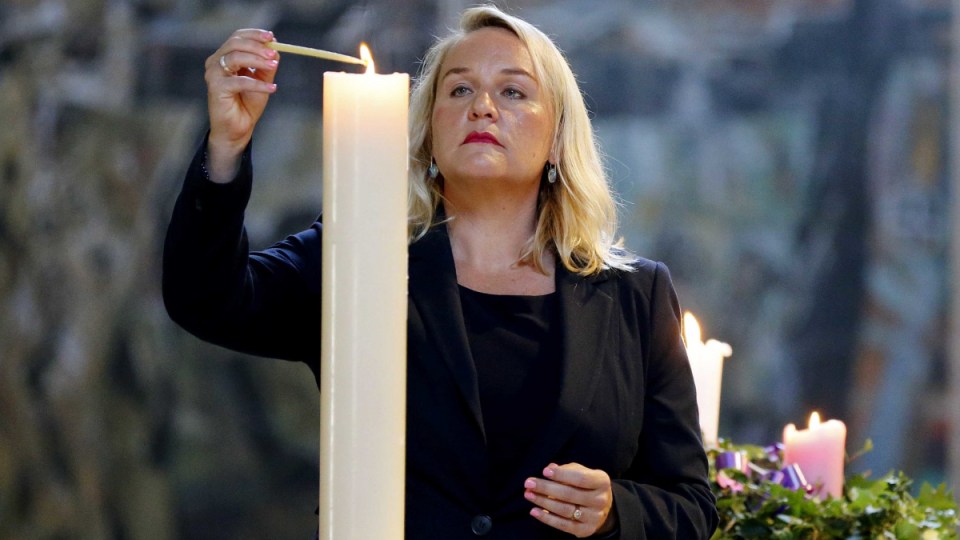 Newcastle mayor Nuatali Nelmes lights a candle during a service to commemorate the 13 victims who died in the 1989 earthquake. Photo: AAP

It lasted just six seconds but 30 years since Newcastle was ripped apart by a devastating earthquake, the community has not forgotten.

The magnitude 5.6 quake killed 13 people, destroyed thousands of buildings and left many residents homeless when it struck on December 28, 1989.

Novocastrians gathered at Newcastle’s Christ Church Cathedral on Saturday to commemorate the anniversary of the disaster.

Among those in attendance was Alan Playford, a paramedic who rescued victims of the quake.

Mr Playford was at the Newcastle Workers Club, which became the focal point of the disaster – nine of the 13 people killed by the earthquake were inside.

Honouring the 30th anniversary was a emotional experience, according to Mr Playford, who was joined by other rescuers and victims.

“I would have to say a little surreal, mixing with some of the survivors who brought different stories about how they have gotten on since then,” he said.

“It was a little confronting in some cases but you have to reflect on it.”

The 1989 Newcastle earthquake lasted all of six seconds, but 30 years later, people still recall in sharp detail what they were doing when it struck. The quake damaged 40,000 homes and 147 schools, with damages estimated at more than $4 billion. https://t.co/1PbnBfj3b2 #7NEWS pic.twitter.com/7X1aEdJZoW

The earthquake has left a permanent mark on those who lived through it.

In total 300 buildings had to be demolished, including the workers’ club.

The club was being set up for a gig that night featuring Crowded House, Boom Crash Opera and Split Enz.

Mr Playford described the workers club as “the loneliest place on earth”, after police ordered everyone but rescuers to leave.

“There wasn’t a soul there except for the dead, those injured and the rescuers and paramedics,” he said.

“We did get in there and found quite a number of people trapped under hundreds of tonnes of concrete, still alive, which beggars belief.

It has been 30 years since the earthquake struck Newcastle. Today is a day to remember the 13 people who tragically lost their lives, and to celebrate the resilience of one of Australia's great cities. pic.twitter.com/R7TAgD0J6p

Three people were killed on Beaumont Street in inner-suburban Hamilton when shop awnings collapsed and another person died the following day from quake-induced shock.

About 50,000 buildings were damaged with 80 per cent of those being homes, according to figures on the Newcastle City Council website.

The total bill from the damage reached $4 billion.

30 years ago today, #Newcastle was hit by an earthquake measuring 5.6. That same day, my little family's world was rocked with the birth of my brother, @boyonastringAU. As this article so aptly puts, "everyone's experience that day was different". https://t.co/UXgOCCors6

Newcastle Lord Mayor Nuatali Nelmes said those killed in the disaster have not been forgotten by the city.

“It’s hard to believe three decades have passed since the earthquake because the day is still so vivid for many of us,” she said.

“We also acknowledged the incredible efforts of the city’s emergency services personnel and others who helped their fellow citizens in a situation that might have overwhelmed people of lesser mettle.”