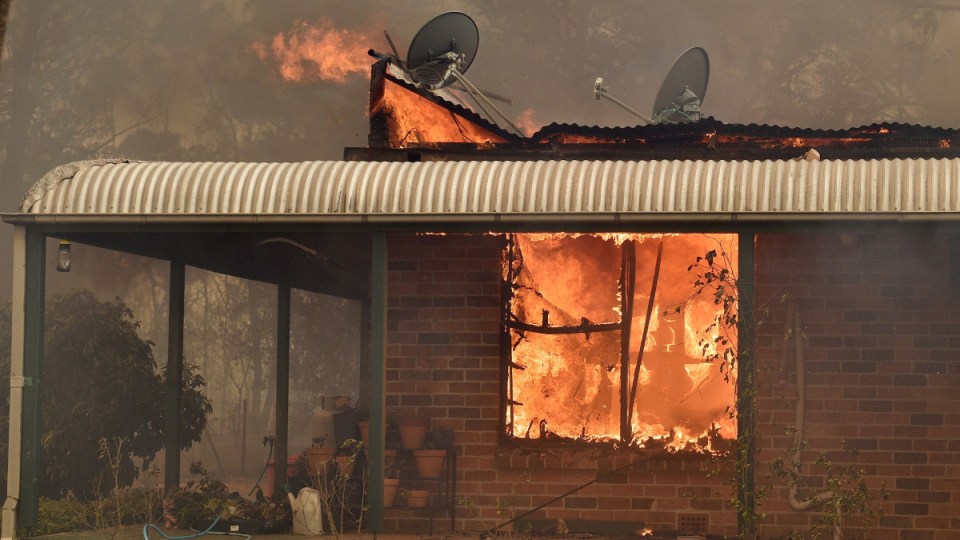 A house burns at Balmoral, south-west of Sydney, on December 19. Photo: Getty

The NSW Rural Fire Service says another 100 homes are believed to have been destroyed in fires that tore through the state at the weekend.

RFS deputy commissioner Rob Rogers said property losses were not finalised because crews were still going through areas affected by the blazes that flared up in catastrophic conditions.

“I think it’ll be another 24 hours before we get an accurate number but I think it is fair to say it is around 100,” he said on Monday.

That would bring the total number of houses lost in NSW this bushfire season to more than 850.

Areas hardest hit in the weekend fires include Lithgow and along the Bells Line of Road in the upper Blue Mountains, and the Wollondilly Shire villages of Buxton and Bargo, which were ravaged for the second time in three days.

NSW Premier Gladys inspected fire-affected areas in the Blue Mountains on Monday, saying she couldn’t thank the people who were working to protect life enough.

“I saw today just how close the fire line got to homes in Blackheath, in what we would regard as suburbia,” she said.

“I saw how close people could have lost their lives and how quickly events are unfolding.”

Also on Monday, Prime Minister Scott Morrison took an aerial tour of the bushland where the Gospers Mountain megafire destroyed dozens of buildings in the Bilpin, Dargan and Clarence areas in the Blue Mountains at the weekend, before arriving in Mudgee to meet evacuated residents and NSW Rural Fire Service members.

Residents fled their homes on Saturday night after the massive Gospers Mountain and Oakey Creek fires joined, creating what locals have described as a “fireball” that tore through the area north west of the Blue Mountains.

Mr Morrison spoke to locals at the Mudgee Evacuation Centre who were nervously waiting to hear if their homes – saved once already on the weekend – were again about to be in the path of the megafire after it changed direction.

Ilford family John and Nova Cunningham and their three children arrived at the Mudgee Evacuation Centre at 11pm on Saturday. They have remained their since, awaiting an update about their home.

“There was a fireball that came through, it was this huge roar and that’s when it just hit everybody and we had to leave,” Ms Cunningham said.

“Our house is OK, we think, and we’re hoping to hear an update today if we can return. But the wind has changed the fire’s direction so we’re definitely not in the clear yet.”

Meanwhile, the first residents were expected to return to Balmoral, a rural town of about 400 people south-west of Sydney, on Monday afternoon following a bushfire that is thought to have all but wiped out the town.

Earlier, Ms Berejiklian said damage assessment teams had relayed the news that “there’s not much left in the town of Balmoral”.

The Balmoral RFS captain has told ABC radio that his brigade ran out of water trying to fight the furious blaze.

Matthew Deeth, the mayor of the neighbouring Wollondilly Shire Council, said the fires took a heavy toll on Balmoral.

“They were all banding together until they got hit yesterday and they were just decimated,” he said.

“Most people were pulled out of their houses and if there was nobody defending houses they kind of just all lit up.”

“It’s an enormous amount of the landscape and forested areas,” he said.

“We shouldn’t underestimate just how much of the natural environment is being burnt and that’s got serious ecological impacts as well as the fire impact … I think that’ll be felt for years to come.”

#LOSTMTNS Summer 2019 📸cred : @lostmtns #bluemountains . . . . UPDATE : All fire fighters are currently tackling blazes across the top of the mountain (Mt Vic, Blackheath, Mt Hay, Leura) Keep your Notifications switched on for “Fires Near Me” APP and follow the @nswrfs direction. If you get asked to evacuate, do it #priorities #bluemountains

Earlier on Monday, NSW Rural Fire Service commissioner Shane Fitzsimmons said firefighters would take advantage of more favourable conditions expected to stick around until the end of the week.

He said they were doing significant backburning in the Blue Mountains and south-west Sydney.

“A massive amount of work right across fire grounds the length and breadth of the state will continue throughout this Christmas-New Year period,” Mr Fitzsimmons told Seven’s Sunrise.

He said firefighters were “absolutely tired” but doing a remarkable job.

“Yes, they’re fatigued – physically fatigued, emotionally fatigued – but they know their communities are under threat and they’re going to do all they can,” he said.

“Particularly over this Christmas-New Year period to get some of this critical work underway and shore up as much protection as they can.”

NSW’s firefighting ranks were bolstered at the weekend with the arrival of crews from Canada and the US.