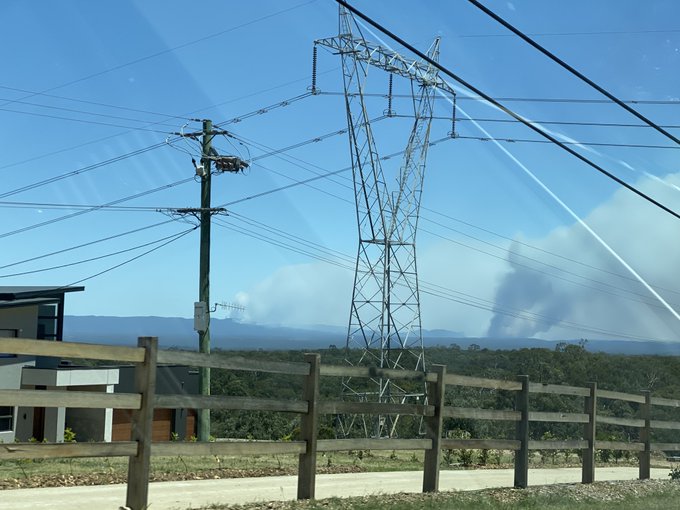 Emergency alerts have been issued for Gospers Mountain blaze in Sydney's northwestern outskirts and another near Warragamba Dam. ABC News

An emergency warning has been issued for the 230,000-hectare Gospers Mountain blaze on Sydney’s north-western outskirts, and many in the Colo Heights area have been told it is “too late to leave”.

A second fire spanning 34,000 hectares at Green Wattle Creek, near the Warragamba Dam, has also been upgraded to an emergency level.

Strong westerly winds have fanned the Gospers Mountain fire, spurring fears it might merge with the 6000-hectare Three Mile blaze near Wisemans Ferry.

A fourth bushfire in the Blue Mountains National Park west of Sydney has razed 30,000 hectares since last Tuesday.

And by 3pm, the NSW Rural Fire Service issued a fifth emergency warning for an out-of-control bushfire at Yengo National Park (Singleton LGA).

“If you are in the area of Paynes Crossing seek shelter as the fire approaches,” an emergency warning read on social media.

Gary Flynn from the Wisemans Hotel said the small town was “dead quiet” as bushfires burned about a kilometre away across the Hawkesbury River.

“We are just copping all the smoke,” he said.

“We are just keeping an eye on things at the moment. The town is dead quiet. It’s a different story for the poor buggers across the river.”

The fire service said there were dangerous fire conditions across NSW.

“Today [Thursday] will be a long and challenging day,” the RFS said on Thursday morning.

“High temperatures and strong winds will make conditions dangerous at many of the 100-plus fires burning across NSW.”

#BREAKING: 2 fires are at EMERGENCY LEVEL right now at Gospers Mountain and Green Wattle Creek. 9 fires are at Watch and Act. Thousands of firefighters are on the ground battling the fires.#fires #nswfires #nswbushfires #nswrfs #sydneysmoke pic.twitter.com/a0qdVXw3ey

A team of 21 fire management specialists arrived in Sydney from Canada on Thursday to help the state deal with the ongoing bushfire crisis.

Eight fires were at a “watch and act” level by lunchtime including the 53,700-hectare Currowan blaze north of Batemans Bay on the South Coast.

The Currowan fire destroyed at least one home near the town of Kioloa earlier in the week.

The “longest period” of air pollution on record for NSW is also set to continue on Thursday. The Bureau of Meteorology said heavy smoke billowing from the bushfires surrounding Sydney would linger in the city basin until Saturday.

Sydney’s east and south-west were rated as “hazardous” for air pollution on Thursday, while the city’s north-west was between “very poor” and “hazardous”.

“An overnight temperature inversion will trap the smoke in the Sydney basin. This means smoke will settle in many areas and be very heavy,” the RFS said.

The environment department said this season’s bushfire emergency had caused “some of the highest air pollution ever seen in NSW”.

“Recently NSW has experienced elevated levels of pollutants as a result of smoke from the bushfire emergency, and dust caused by the severe drought,” a spokesman said.

“NSW has experienced other periods of poor air quality that lasted several weeks, including the 1994 Sydney bushfires and the Black Christmas bushfires of December 2001 to January 2002.

“This event, however, is the longest and the most widespread in our records.”

Winds averaging up to 50km/h were expected on Thursday, along with gusts of up to 80km/h across the ranges. Friday’s conditions are expected to be even worse.