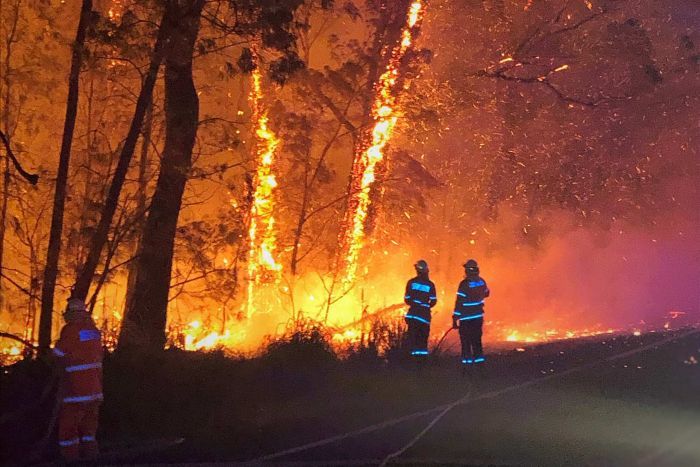 There are growing calls for a co-ordinated national response to this year's bushfire season. Photo: Facebook/NSW Rural Fire Service

A bulldozer operator has been killed while helping fight a bushfire in Victoria’s Gippsland region.

The man was working on earth breaks on private property so firefighters could battle a blaze on public land.

“It’s the worst possible day we could have as a team, personally it’s just a horrible, hollow feeling,” Mr Hardman said, without revealing the specific cause of the man’s death.

“We’ve lost somebody that’s come to help us and I hope and pray that we don’t lose any more people.”

The man was from East Gippsland and had helped fire crews in the past.

Victoria Police are preparing a report for the coroner and WorkSafe is also investigating.

Incident controller Peter Brick said while there had been cooler conditions at the weekend, the underlying drought meant fire activity could quickly ramp up when the warmer weather returns.

“We can’t reiterate enough how dry the land is across Gippsland at the moment,” he said.

“Now’s the time to prepare.”

Meanwhile, further north, an out-of-control fire closed parts of the Princes Highway on the New South Wales South Coast on Monday, shutting off escape routes for some nearby coastal communities.

The fire, north of Batemans Bay at Currowan, is subject to an emergency warning and was bolstered by strong westerly winds overnight, spotting over the Princes Highway and into Murramarang National Park.

“We do have a significant amount of [fire] now across the Princes Highway, around the south of Termeil,” Mark Williams from the Shoalhaven RFS said.

“That fire’s making its way in trying and increasingly strong wind conditions out to the east, and its going to impact on those coastal settlements between Bawley Point and North Durras during the day.”

Rural Fire Service spokesman Greg Allan said the blaze had intensified and grown since it was first declared an emergency on Sunday.

“What we’ve seen overnight, around midnight, is the fire spotted across the Princes Highway in the easterly direction under very strong westerly winds,” he said.

“That’s basically cut the access for those coastal communities.”

Glenn Sullivan from the Far South Coast Marine Rescue said the service was prepared to use boats to evacuate residents from beaches, but said no plan had been put into action yet.

“With a series of cold fronts coming across the state, we’re going to see very strong and gusty west to south-westerly winds – and that’s what’s going to be our main problem today with the number of fires already burning,” he said.

“Temperatures might be lower, humidity might be higher, but those winds are pushing those elevated fire dangers across the state today.”

While the fires continue to burn, parts of high country Victoria have been dumped with snow in a chilly start to summer.

Falls Creek had snow overnight on Sunday and Monday, as did Mount Buller and Mount Hotham.

Great Alpine Road between Harrietville and Hotham had to be cleared of snow on Monday morning and drivers were warned more was expected.