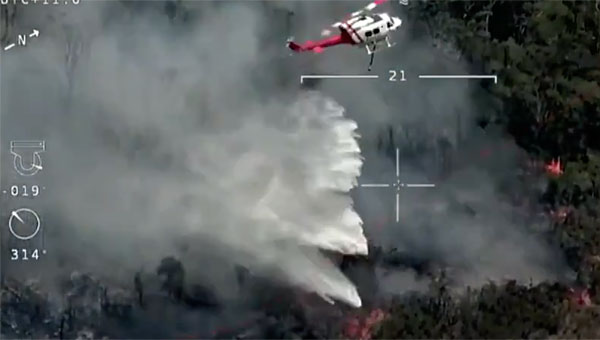 Aircraft crisscrossed much of NSW on Monday, searching for fresh bushfires ignited by lightning from overnight thunderstorms, as the weather bureau warned of dangerous new storms looming for the afternoon.

Sunday night’s storms brought rain to several of the fire grounds in northern NSW, and eased conditions. But the state’s Rural Fire Service feared they might actually worsen the ongoing bushfire crisis when hot and windy weather returns later this week.

But RFS spokesman James Morris said rain that fell in NSW at the weekend was too isolated and not enough to help put out the fires burning across large parts of the state’s north, while a large number of lightning strikes might prove a ticking time bomb for when hot and windy weather returns.

“We did get rain across a number of firegrounds in the state but, across those firegrounds, it was isolated,” Mr Morris told the Nine newspapers.

“It is very isolated and some areas aren’t getting any rain at all, but they did get dry lightning.”

On Monday afternoon the weather bureau issued a severe thunderstorm warning for Sydney, the Hunter, central tablelands and parts of the NSWS mid-north coast, north-west Slopes and plains and northern tablelands.

“Severe thunderstorms are likely to produce heavy rainfall that may lead to flash flooding, damaging winds and large hailstones in the warning area over the next several hours,” it said at 3pm (local time) on Monday.

“Locations which may be affected include Gosford, Sydney, Armidale, Orange, Bathurst and Katoomba.”

The Bureau of Meteorology also said it might need to issue a warning for Sydney, Newcastle, Wollongong or surrounding areas if thunderstorms developed in those areas.

UPDATE: #SevereThunderstorms have developed across parts of NSW, including western Sydney. Heavy rainfall and damaging winds are possible. See the latest warning at https://t.co/3q9lebjCtA pic.twitter.com/e8unrc1P6T

On Monday morning, an 80,000-hectare fire at Myall Creek Road in Bora Ridge, south of Casino, rose to emergency warning level, with more than 60 others in NSW at advice level.

The NSW RFS advised people in the Woombah or Iluka areas who were planning to leave or unprepared to leave immediately towards Grafton.

EMERGENCY WARNING: Myall Creek Road Fire.
Fire activity is increasing around Mororo Road. Residents in this area should seek shelter as the fire approaches. Residents in Ashby and Ashby Heights, if you are not prepared and your plan is to leave, leave now towards Maclean. #nswrfs pic.twitter.com/45q8hiGQby

Overall, however, conditions had eased compared with the danger faced in recent weeks, according to the Rural Fire Service. Its fire danger warnings were reduced to very high for southern regions and high across the rest of the state.

Meanwhile, rain in other parts of NSW was hampering back-burning efforts.

“Easing conditions will allow firefighters to identify and strengthen containment lines as well as identify new ignitions from yesterday’s storms,” the RFS said on social media.

“Rainfall across some fire grounds yesterday is making access by ground difficult to some areas today. This will limit the amount of firefighting being done by crews today.”

“In the next couple of days we will see an increase in fire danger ratings,” she said.

“A front will move through the state, with a combined increase in temperatures and strong winds associated with that front.”

Fire dangers would be elevated but were unlikely to be as extreme as those seen in the past fortnight, she said.

Mr Morris said firefighters needed “consistent heavy rain for the likes of four to five days” to help put out the fires and to moisten the fuel enough to stop them flaring again when hot, windy weather returns.