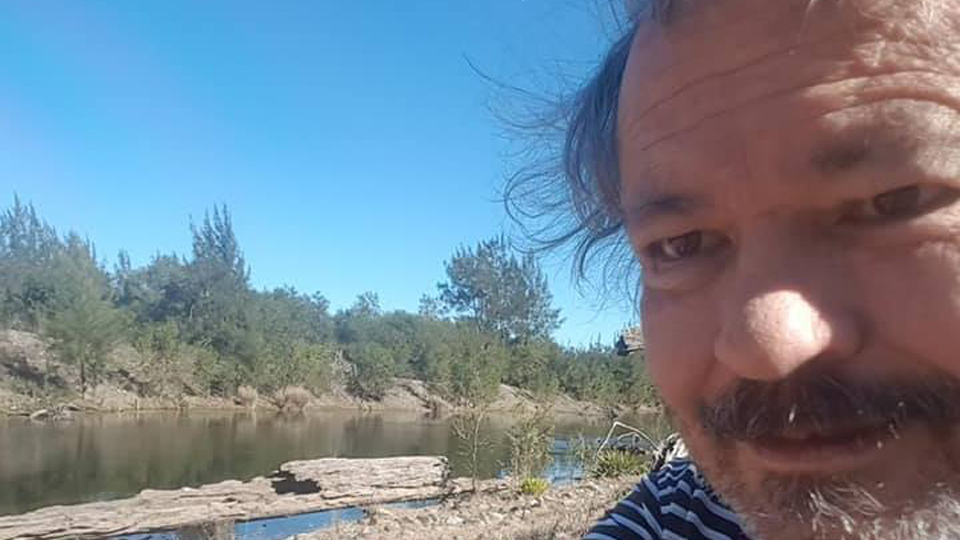 Barry Parsons, who lived at Willawarrin, west of Kempsey, is confirmed to have died in a bushfire. Photo: Facebook

The man who is the fourth person to die in the bushfire horror that has engulfed NSW this week wrote harrowing last posts on social media as the fire raged around him.

“Seriously, looks and sounds like an apocalypse out there,” Barry Parsons wrote on November 7.

“[Tough] being on your own in these times.”

Mr Parsons, 58, who lived at Willawarrin, north-west of Kempsey on the NSW mid-north coast, has been missing since Friday.

Friends have been posting worried messages on social media about him. 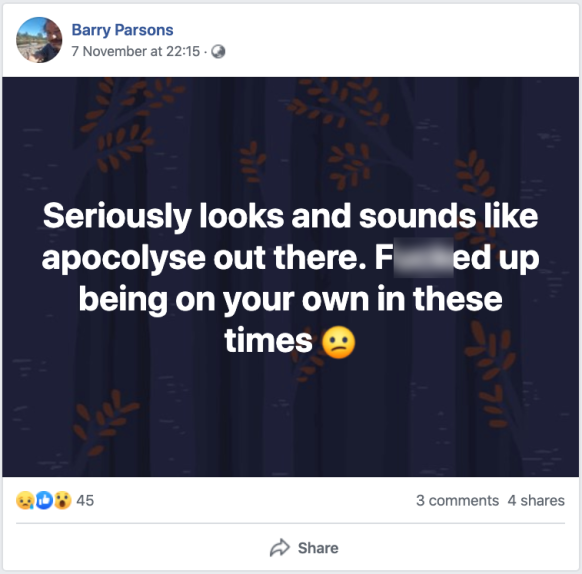 HIs body was found in bushland on the southern end of the Kyuna Track at Willawarrin shortly before midnight on Wednesday.

On Thursday afternoon, authorities confirmed it was Mr Parsons, who lived nearby.

NSW Premier Gladys Berejiklian offered her condolences to his family in Parliament.

“Our deepest condolences and thoughts go out to the loved ones of Mr Barry Parsons, who unfortunately was found deceased in Willawarrin, which is north-west of Kempsey,” Ms Berejiklian said.

“Currently we have about 59 fires burning in NSW, 30 of them still uncontrolled but fortunately none at emergency level.

Since the Premier’s speech, a fire at Myall Creek Road in the Richmond Valley was upgraded to emergency level.

This week’s bushfires had already claimed three lives: Julie Fletcher, who died in Johns River on Saturday, and Vivian Chaplain and George Nole of Wytaliba.

The discovery came as fatigued firefighters continued to focus on the crisis in NSW’s rural north.

About 60 fires were burning across NSW on Thursday morning, with 27 uncontained and eight at “watch and act” level.

A total fire ban declared for NSW earlier this week has lapsed. But the state of emergency declared by the Premier earlier in the week remains in place.

Despite this, a suspected arsonist has reportedly been arrested after an army Black Hawk helicopter chased him through Sydney’s Royal National Park.

The 6th Aviation Regiment unit was returning to Holsworthy base on Wednesday after helping in the bushfire effort in the Blue Mountains when they saw a man acting suspiciously, The Daily Telegraph reported.

The crew alerted police and kept the man in sight, finding his hiding place.

“Even in these pretty benign conditions we’re seeing quite a lot of aggressive fire behaviour simply because it’s so dry,” Mr Rogers told the Seven Network.

“Conditions starting to warm up tomorrow, into the weekend and then heating up early next week, a return to more gusty conditions. We’re in for the long haul.”

The RFS has confirmed at least 50 homes were damaged or destroyed on Tuesday.

Mr Rogers said fires in the mid-north coast areas such as Taree, Port Macquarie, Kempsey and Coffs Harbour were proving hard to control, as was a blaze near Lithgow in the Blue Mountains.

More than 1000 firefighters remain in the field to protect properties and establish containment lines before worsening conditions later this week.

Across the border in Queensland, a teen has been accused of starting a bushfire that razed 14 homes in central Queensland.

Police say the 16-year-old boy has not been charged with arson, but will be dealt with under the state’s Youth Justice Act.

The Cobraball fire, near Yeppoon, was started about 1.30pm on Saturday and is still burning days after it destroyed homes, sheds and cars.

Also on Thursday, residents of two northern towns near Gympie and Bundaberg were told to leave as bushfires in the areas worsen.

The alerts were issued for Black Snake, in the Gympie region and Woodgate, south of Bundaberg early on Thursday morning.

Fire conditions in both areas deteriorated overnight and were not expected to improve in the near term, the Queensland Fire and Emergency Services said.

More than 70 fires are burning across Queensland.

While authorities keep a close eye on Woodgate, Black Snake and Noosa North Shore on Thursday, firefighters will make the most of a brief respite in the weather to strengthen containment lines.

QFES assistant commissioner Tony Johnstone said more than a dozen aircraft were being readied to bring several fires under control while moist coastal winds bring a short-lived relief on Thursday.

That relief won’t last long, with forecasters expecting westerly winds to dominate conditions on Friday as the fire threat intensifies.

The weather bureau warns the westerlies will push extremely dry air back towards the coastal fringe.

“We would expect to see the maximum temperature quickly return to four-to-eight degrees above the November average on Friday and into the weekend,” a spokeswoman said.

“When we combine that with the dry air, we expect to see elevated fire dangers once again as we head toward the weekend.”

In Western Australia, a bushfire warning was issued early on Thursday for residents at Geraldton, north of Perth. The fire was later declared under control.