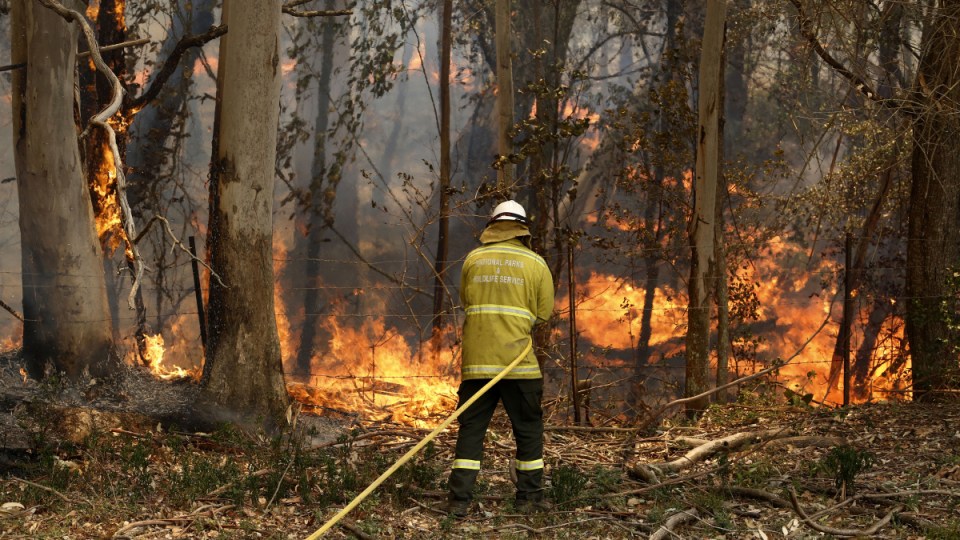 Exhausted NSW fire crews are bracing for the impact of a southerly change after an exhausting and anxious day that saw 300 fresh fires erupt across the state.

The anticipated gale-force winds associated with a cool change add an extra complication, as the change in direction will turn the flanks of existing fires into new and much larger fronts.

The change is predicted to move north through the Greater Sydney and Greater Hunter regions before reaching Port Macquarie, where a number of the emergency-level blazes are burning, later this evening.

As of 9:00pm AEDT emergency warnings remained in place for nine blazes among the 73 fires still burning around the state.

An emergency warning was issued for South Turramurra near Hornsby in the northern Sydney suburbs on Tuesday afternoon with a catastrophic fire danger rating in place for the Greater Sydney, Greater Hunter and Illawarra-Shoalhaven regions.

Fire retardant has been dropped on houses in South Turramurra as an emergency-warned fire burns very close by. #NSWFires pic.twitter.com/zkTjizZCCq

It is the first time the catastrophic rating has been used since it was introduced a decade ago.

The South Turramurra blaze was brought under control within two hours of it being reported, but the victory over the raging flames was not without cost.

A firefighter was taken to hospital with a broken arm, while residents returning to  Field of Mars Ave found their homes and street heavily dusted with red fire retardent dropped by a fire bomber.

High temperatures, low humidity and strong winds, coupled with a drought-induced dry, have resulted in “horrendous conditions”, according to the NSW Rural Fire Service.

More than 50 fires were raging across NSW late as of sundown, 30 of them uncontained – and millions of hectares were ablaze.

There were emergency warnings for 12 fires, from the NSW mid-north coast to Queensland’s border, as millions of residents faced hideous fire danger.

People in the path of fires are being urged to relocate with a leave warning specifically directed at residents near a blaze in the Wollemi National Park north of Sydney.

“If you are in the area of Mellong, St Albans and Upper MacDonald and your plan is to leave, leave now to a safer location,” the RFS said.

There is also concern regarding a small fire at Llandilo in western Sydney which the RFS deemed out of control.

As the RFS warned catastrophic fire danger had reached Nowra, on the state’s far south coast – the weather bureau warned conditions would get worse before they got better.

But firefighters and the weather bureau said the next few hours would be the most dangerous yet.

Stuart Ellis from the Australasian Fire and Emergency Service Authorities Council said NSW would not feel the real impact of the weather conditions until later on Tuesday.

“This event will develop late in the day, particularly for Sydney, the Hunter and the Illawarra,” he told ABC TV.

“The conditions are going to get increasingly dangerous throughout the afternoon,” she said.

RFS commissioner Shane Fitzsimmons said Tuesday was playing out as predicted, with average winds up to 60km/h across the ranges, and gusts of more than 70km/h.

“They will continue to strengthen and build ahead of the passage of that cold front that’s moving across the state,” Mr Fitzsimmons said.

“Later on today, we’re expecting the southerly to start influencing and driving like a southerly buster up the coastal strip, and more southwesterly-southerly across the ranges and further inland.”

“This southerly is going to continue through and those strong winds are not going to get to northern areas of NSW until midnight or early the hours of this morning across some of these fire grounds,” he said.

Mr Fitzsimmons said there would unfortunately be no reprieve for firefighters with the southerly change bringing no rain. Warm, dry conditions were also set to dominate in the days – and weeks – ahead.

“As we look out a little bit further, we’re expecting a cyclical pattern of increasing temperatures as we head into the end of this week and indeed as we head into next week,” he said.”

Nine NSW schools were evacuated on Tuesday, after more than 600 schools and TAFEs were closed. Childcare centres in high-risk areas were also closed.

Rally Australia, the final round of the World Rally Championship, also was cancelled because of concerns over destructive fires near the venue in the forests around Coffs Harbour.the Coffs Harbour region braced for extreme fire danger.

“Absolutely everything we can do is being brought to bear.”

A week-long state of emergency has been declared by NSW Premier Gladys Berejiklian, who has pleaded with people to heed the fire service’s warnings and stay away from bushland.

Defence Minister Linda Reynolds has said Australian Defence Force personnel would be on standby to provide other support if needed.

Emergency Services Minister David Elliott said residents faced what “could be the most dangerous bushfire week this nation has ever seen”.

Fires since Friday have claimed the lives of three people and destroyed at least 150 homes.

It is also estimated that at least 350 koalas have perished in the fires.

Queensland is also bracing for severe fire danger as temperatures soar up to 10 degrees above average in coming days.

Conditions are expected to worsen on Tuesday, with high to very high fire danger forecast and severe conditions expected mid-week.

There are 65 bushfires statewide, with an uncontrolled blaze at Cobraball in central Queensland that by Monday had destroyed eight homes and damaged five.

Bureau of Meteorology forecaster Vince Rowlands said hot, dry and windy conditions were expected to peak on Wednesday. There would be a couple of easier days before the winds strengthened again at the weekend.

Much of the state is suffering “pretty poor air quality” due to smoke. Mr Rowlands said that would remain for some days.

No significant rain is forecast for the next week and long-term predictions are for drier and warmer than average conditions.