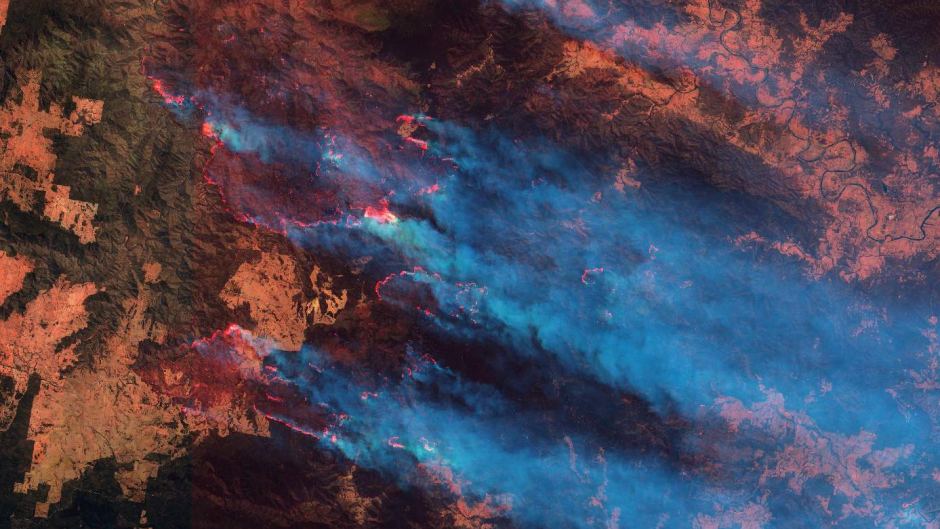 NSW’s fire boss said the state had never seen anything like it before.

And, a weather system thousands of kilometres away is at least partly responsible, experts say.

Although emergency services were bracing for an intense fire season — which started earlier than predicted — a bushfire expert said climate change had created the “fairly extraordinary circumstances” seen this week.

Trent Penman is an associate professor at the University of Melbourne who studies the behaviour and formation of bushfires using real depictions of fuel, weather and topography.

He said the bushfires could be partly explained by monsoon season ending late in India.

“The global systems are all linked … we can’t dissociate them,” Dr Penham said.

“But … if you’re sitting in one area it’s very hard to imagine that the weather 10,000 kilometres away is actually going to have an impact.”

The south-west monsoon in Asia typically occurs between June and September every year — those winds then leave the region and move south.

However, this year the record-breaking rainfalls didn’t retreat from India until mid-October.

This led to a delay to the big wet in Darwin and therefore left the eastern coast dry and fire-prone.

“The rain that may normally occur in these regions at this time hasn’t actually come down due to that global event,” Dr Penham said.

“And so because of that these regions are hot, dry and windy. These are the perfect conditions for extreme fires like what we’re seeing at the moment.”

RFS commissioner Shane Fitzsimmons said drought conditions were to blame for the magnitude of the infernos.

“I could only recall a figure of 10 [emergency bushfire warnings] that we got to, which is an extraordinary event in years past,” Commissioner Fitzsimmons said.

“We just cannot overstate the influence of the drought-stricken landscape.”

The drought has also made regional towns particularly vulnerable to fire damage, according to Justin Leonard, who leads the bushfire adaptation research at the Commonwealth Scientific and Industrial Research Organisation (CSIRO).

“People may not be completely aware that those dry conditions also mean that your house and all the things around it — the fences, retaining walls and ground covers — are also much drier than they normally would be,” he said.

The fires have been so intense, they have created their own weather systems.

For similar reasons, storm clouds appear above an erupting volcano — the combination of heat and wind creates a convection effect which resembles a hellscape for the people within.

Dr Penman said these made fires more unpredictable and “very dangerous” for firefighters.

How weather in India helped create the perfect firestorm Down Under