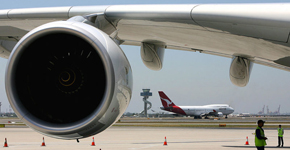 A Swedish man has allegedly been caught trying to smuggle into Australia an estimated $12 million worth of ice hidden in his suitcases.

A Swedish man has been caught at Sydney Airport allegedly trying to smuggle an estimated $12 million of the drug ice into the country hidden inside the lining of two suitcases.

The 39-year-old was arrested on Wednesday after Australian Border Force officials examined his unusually heavy suitcases after he arrived in Sydney from Turkey.

Each of the suitcases weighed close to nine kilograms when empty.

An x-ray uncovered 16 kilograms of a brown powdery substance that officials say tested positive for ice.

The Australian Federal Police were called in to arrest the man. He was subsequently charged with importing a commercial quantity of drugs and will face Central Local Court at a later date.

“This was a brazen attempt to sidestep authorities and bring a significant amount of ice into our homes,” AFP commander Kylie Flower said in a statement.

“While these drugs have an estimated street value of $9 to $12 million, the human cost to our communities would have been far greater.

“If you are a methylamphetamine user, know that you are being taken advantage of by people who do not care for your health, your family or your finances.”

Swedish man ‘had $12m of ice’ at airport