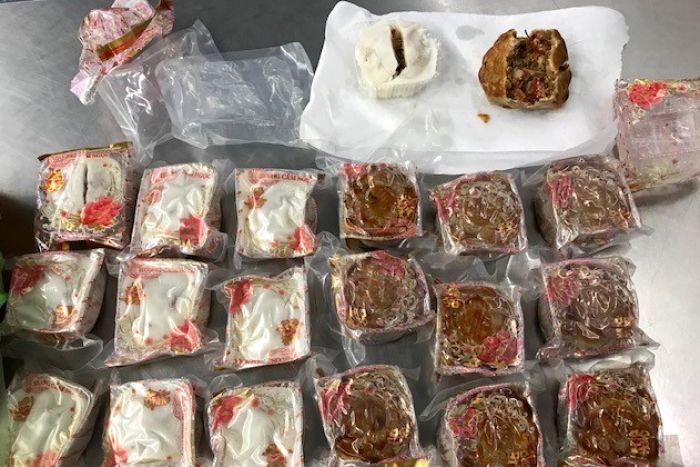 Vietnam had an outbreak of African Swine Fever in February and pig products from countries infected with the deadly disease are banned in Australia. Photo: Department of Agriculture

A Vietnamese man carrying four kilograms of pork-filled mooncakes has been turned away from Australia after failing to declare he was carrying food.

He was the second person to be refused entry into Australia, following the introduction of tough new biosecurity rules earlier this year.

Agriculture Minister Bridget McKenzie said the 60-year-old man did not declare the food in his luggage when attempting to enter Australia via Sydney International Airport on Saturday.

It comes as a the deadly pig disease, African swine fever, which can be transmitted to pigs in pork products, has spread closer to Australia.

“That’s why I have zero tolerance approach to those who intentionally do the wrong thing and lie about what they’re carrying,” she said.

Once deported, the man will not be eligible to travel to Australia for three years.

Australia’s livestock industries, the National Farmers Federation and Australian Pork Limited, have been calling for increased funding for biosecurity, as the deadly pig disease spreads closer to Australia.

More than a quarter of the world’s pigs are believed to have died due to African swine fever.

How African swine fever is spread

It is feared the disease could be transmitted via air passengers traveling through Melbourne and Sydney’s airports, or spread through the feral pig population which is 10 times the size of the domestic pig herd.

African swine fever is spread when pigs come into contact with contaminated pigs, pork products, feed, ticks, and infected material such as syringes.

The disease can be found in pork products — even if they have been cooked or frozen.

It can also be transmitted via humans wearing contaminated clothing and boots into an area where uninfected pigs are kept, resulting in infection.

The disease has a 100 per cent mortality rate in pigs.

“If pork products carrying the virus get past our border, are eaten by family and friends and the leftovers fed to pigs then we’ll be in a world of pain,” Ms McKenzie said.

Australian migration laws were amended in April to shorten or cancel a visitor visa, for biosecurity contraventions and the importation of objectionable goods.

Vietnam reported an outbreak of African swine fever in February, and the Food and Agriculture Organisation of the United Nations reports almost 6000 pigs have been culled there due to the disease.

The Australian Government has banned the import of pig products from countries infected with African swine fever.

In the eight months to September, border officials confiscated 27 tonnes of pork products at Australian airports.