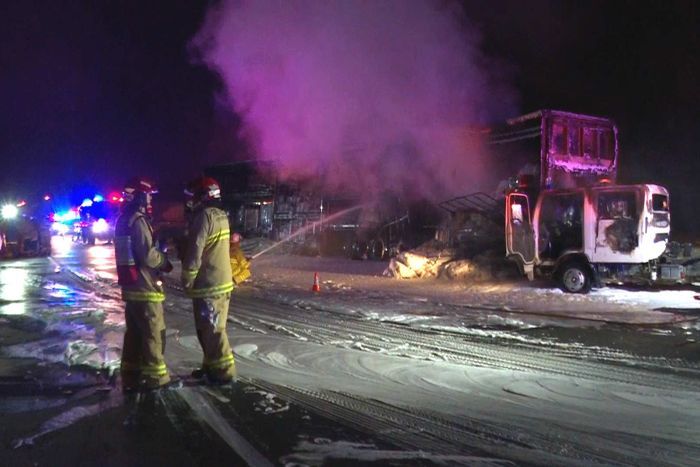 A fiery crash involving four trucks has closed the M1 north of Sydney and five men have been taken to hospital. Photo: ABC

Five men have been taken to hospital after a B-double crashed into three other trucks and burst into flames on the NSW Central Coast.

“There were trucks on fire and wreckage everywhere,” NSW Ambulance Inspector Rob Ryan said after the crash on the M1 at Warnervale on Wednesday morning.

“These people are extremely lucky to have escaped with only minor injuries. This had the potential to be much worse.”

Police Chief Inspector Colin Lott told reporters one witness had indicated the moving vehicle was swerving at the time of the incident.

“Police will investigate that with the view it may have been just a tired driver, fatigue,” he said.

“However, (the driver) hasn’t been interviewed at this stage.”

The fire spread from the B-double to the other trucks.

The driver of the B-double was taken to hospital with a shoulder injury and to undergo mandatory testing while four road workers were treated in hospital for shock.

The crash forced the closure of the M1 but the two northbound lanes have since been re-opened following a salvage and clean-up operation.

Police have called for anyone with dashcam footage of the crash to come forward.

The Transport Management Centre says traffic is heavy on the motorway with drivers urged to allow extra travel time.