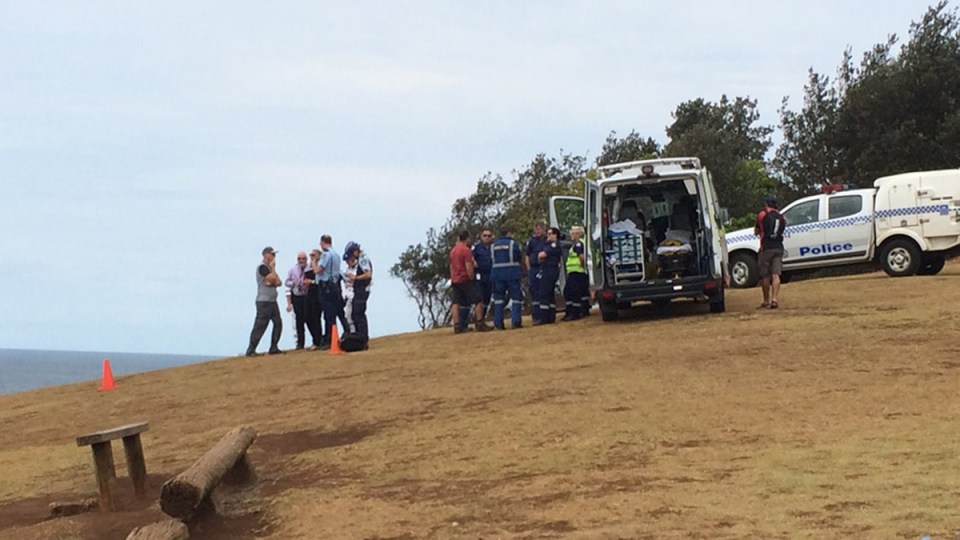 Rescue authorities at the scene of the tragedy on Wednesday. Photo: Facebook/ABC North Coast

One man is dead and another is fighting for life after falling from a hang-glider on the NSW north coast.

Paramedics were called to Pat Moreton Lookout at Lennox Head just after midday on Wednesday after reports the men had fallen from the hang glider before it crashed.

Bystanders managed to make their way to the injured men and began CPR. However one of the men – believed to be in a 67-year-old – died at the scene.

The other man, a 26-year-old tourist, has been winched out and airlifted to Gold Coast Hospital in a critical condition.

Local media are reporting the dead man was an experienced hang-gliding instructor. The other man, thought to be an Irish national, was his tandem partner.

Update: #Lennoxhead Helicopter preparing to winch patients from Pat Morton Lookout. Two patients, a man in his 70s and a man in his 20s. Three crews and the rescue helo responding #lennoxhead #nswambulance #Rescue500

“This was an extremely complex rescue for paramedics and emergency services due to the surrounding terrain and location of where the hang-glider crashed,” NSW Ambulance Inspector Greg Powell said.

“We always do everything we can to try to get the best patient outcome, but unfortunately, in this instance there was nothing more we could do.

“It was an extremely tragic accident and understandably everyone involved is devastated.”

Police have established a crime scene and are investigating what caused the crash.

The Sports Aviation Federation of Australia is assisting police with their investigation and a report will be prepared for the NSW Coroner.

One dead, one critical after hang-gliding accident