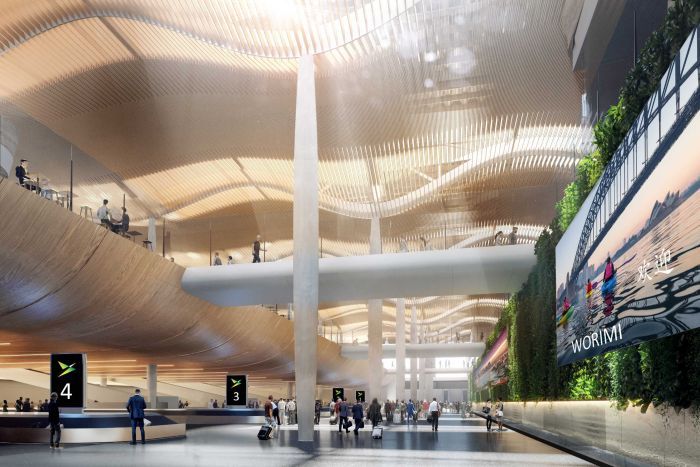 An artist's impression of the new airport terminal. Photo: ABC

The planned design for the new Western Sydney Airport terminal has been revealed, but residents may have to wait years before they see the facility’s draft flight paths.

The federal government released the concept artwork for the $5.3 billion project’s terminal on Tuesday, claiming the designs show a “once-in-a-generation infrastructure project coming to life”.

The sleek plans reveal a large terminal in the centre of dozens of aircraft gates, flanked by two large runways.

A statue of Nancy Bird Walton – the pioneering Australian aviatrix the airport is officially named after – features in the building forecourt.

“This is set to be the largest gateway to Australia and these designs are another step to making it a reality,” Prime Minister Scott Morrison said.

Construction at the airport site has been underway since 2018. Major earthworks are expected to begin next year, before runways, roads, rail and the terminal are built.

But while work is charging ahead at the site, and the concept designs have been released, residents are yet to see the design for the facility’s flight paths – a planning element not expected to be made public until at least 2021.

This has angered Blue Mountains mayor and vocal critic of the airport, Mark Greenhill.

“Frankly, what the people want to know is where the planes are going to fly, not what the terminal looks like,” he said.

“The fact that the government is releasing the terminal design is insulting to those of us who will be living underneath the flight paths.”

Mr Greenhill called on the federal government to release the flight path designs as soon as possible.

“It’s hard not to conclude that there’s some tactic in this,” he said.

“Rush to get the thing built, rush to get as many things finished as possible, so it’s a fait accompli.”

The new Western Sydney Airport is expected to open in 2026.