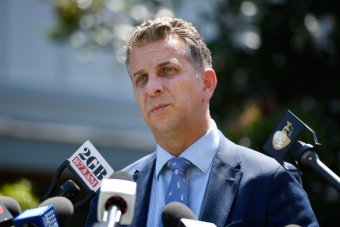 Andrew Constance has pulled out of the race to be the new member for Eden-Monaro. Photo: ABC

The NSW Transport Minister wants to transform Sydney’s 8,000 buses into an “electrified” fleet and reduce their emissions to zero.

Andrew Constance is due to deliver a speech at the Committee for Economic Development of Australia (CEDA) today in which he is expected to tell the audience he wants an “overhaul” of Sydney’s bus network.

“Zero emissions are becoming the standard with their significant environmental, health and operational cost benefits being experienced now in cities like London, Paris and Amsterdam,” Mr Constance is expected to say.

“As a truly global city, Sydney deserves the same.”

In the speech, the Transport Minister, who travelled to Europe last month, says he wants to follow the lead of London, where “drastic action” was taken after “toxic fumes” were revealed to be causing health problems.

Stressing that he is passionate about reducing the air pollution in Sydney, Mr Constance will add that “we need to talk about climate engineering”.

“I’m challenging the industry to begin an ambitious transformation of our bus fleet from particulate emitting diesel to zero-emission buses,” his address says.

The speech comes days after it was announced the remaining Government-run bus routs in Sydney will become privately operated.

There is now “an unprecedented opportunity” to renew the bus fleet, the speech adds.

Electric buses were already being trialled in Sydney with four in the inner-west since July and another 10 to be added in Randwick.

There is no deadline for when Mr Constance wants the entire fleet to be electrified.