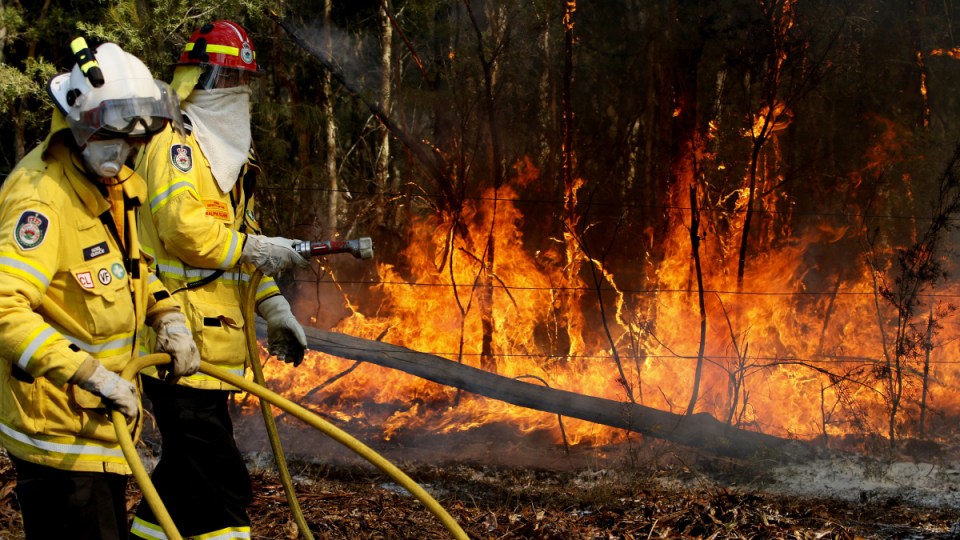 Firefighters fight the blaze at Forster on Sunday. Photo: AAP

The blaze that claimed the lives of two people in northern NSW has finally been declared out but firefighters are still battling 76 blazes across the state.

Firefighters staring down the barrel of a dry summer say they have weeks of work ahead of them to put out the blazes burning across NSW.

On Sunday afternoon the NSW Rural Fire Service finally declared the deadly Long Gully Road fire near Drake out. It began on September 5, and had burned through more than 74,000 hectares, destroyed 44 homes – and killed 77-year-old Bob Lindsey and 68-year-old Gwen Hyde.

After a weekend of hot and windy conditions across NSW, just one bushfire was left classed as a watch and act by the RFS on Sunday.

A blaze at Kangawalla, east of Glen Innes, was declared out of control, , with firefighters managing to bring two others burning in northern NSW under control.

The other fires – one of which burned through more than 2600 hectares in the Darawank area, north of Forster-Tuncurry, and another blaze at Tuncurry that jumped a river and began spotting close to town – were declared under control on Sunday night.

Andrew O’Sullivan, whose two-hectare property on the edge of the Tuncurry township burned on Saturday, said cabbage tree palms had exploded and the heat of the fire “literally melted the pots off the plants” in a nearby nursery.

“We had it on four sides. I’ve never gone through this before and I never want to again.”

9:30pm: 76 bush or grass fires burning across NSW all at the Advice alert level, 43 not yet contained. More than 820 firefighters currently working to contain these fires. Ahead of forecast increasing winds & temps later in the week, know what you'll do if fire threatens. #NSWRFS pic.twitter.com/AVRIkp6WAY

Across NSW, a further 43 fires were not yet contained, the RFS said in a statement posted to Twitter.

“Right now [76] fires continue to burn with more than half yet to be contained. There is weeks of work ahead without the prospect of any meaningful rain.”

Deadly NSW fire declared out, but risks remain high ahead of hot summer