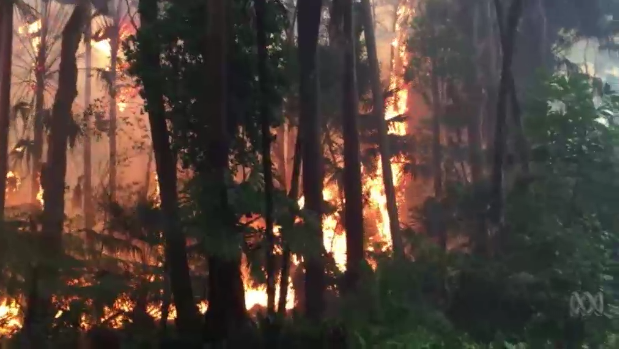 The bush becomes an inferno near Tuncurry. Photo: ABC

Emergency crews have gained the upper hand in fighting 85 fires across NSW but two blazes near Forster-Tuncurry have escalated again.

A fire in Darawank, which has destroyed two homes, is now at a Watch and Act level and moving towards Corrigan.

Many residents in the area were metres from losing their homes to the blaze yesterday.

Sharon Bourke, who owns the heritage-listed Tuncurry House with her family, managed to save the property from 30 metre-high flames.

“All of a sudden the wind changed and it whipped around … (then) it was coming from all three sides,” she said. “It was very scary.”

Another blaze, near Minimbah, which has been burning for more than a week, was brought under control overnight but also lifted to a Watch and Act this afternoon.

“Fire activity is increasing in the north-western part of the fireground. If your plan is to leave, leave early before the fire threatens,” the RFS said.

The fire has crossed the Coolongolook River and will continue to burn on the western side of Tuncurry.

Two evacuation centres have been set up for residents affected by the those fires, at the Tuncurry Beach Bowling Club and one at Club Taree.

Authorities are working to prepare for a south-westerly wind change later today which could fan the 90 fires still burning across the state.
Greg Allan from the RFS urged residents to report spot fires as soon as possible.

“If you’re in the Darawank area, continue to monitor conditions and be ready to take action if the fire does reach your location, if you do see an unattended fire — that’s flames without a truck — call triple-0 straight away,” he said.

Total fire bans are in place for Greater Sydney, Greater Hunter, the North Coast, New England, the Northern Slopes, and the North Western and Central Ranges.