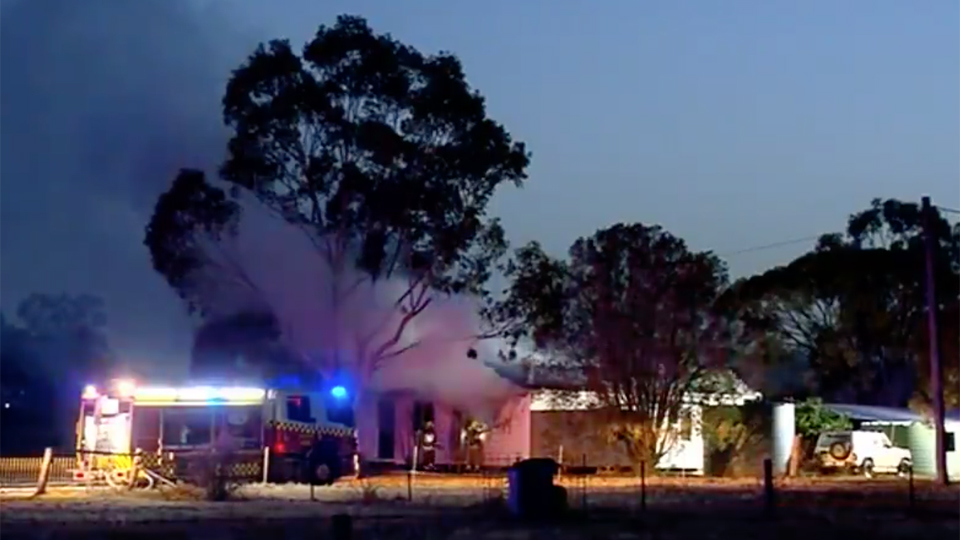 Firefighters say the house was well alight by the time they arrived early on Thursday. Photo: Twitter/7 News

Police are questioning a man after two people, one of them a child, died in a house fire in Tamworth in north-western NSW.

A woman and child were also taken to hospital after the suspicious fire.

Emergency services were called to the home on Bylong Road, in the Tamworth suburb of Hillvue at 5.30am on Thursday and discovered the bodies of an elderly woman and five-year-old boy inside.

A 27-year-old woman was taken to Tamworth Base Hospital in a “very serious” condition after suffering burns, along with a seven-year-old boy who suffered from minor burns and smoke inhalation.

A 60-year-old man, believed to be related to the four people involved, is assisting police with inquiries.

“I woke up this morning to use the bathroom and realised their house was on fire,” Ms Wood told the ABC.

“Flames were coming out the front window – they were fairly big – and there’s obviously a bunch of gum trees out in this area.”

FIRE TRAGEDY: An elderly woman and a child have died in a house fire in Hillvue. Two others have been rushed to hospital suffering burns.

A man is at Tamworth Police Station assisting with their inquiries.

Ms Wood said she and her husband called firefighters, but they were already on their way.

He said the property had a metal roof and its vinyl cladding was on fire.

“It was very intense at the rear of the house with flames coming out of the windows as well,” Mr Jansen said.

Firefighters found the injured pair outside the front of the house, with the woman telling them there were more people inside.

Fire investigators were travelling to Tamworth from Sydney and would work with police forensics to determine the cause and origin of the blaze, Mr Jansen said.

Ms Wood said she was fairly close to her neighbours, describing them as a “lovely family” she had known for years.

“It’s so sad … it’s a tragedy when your house is on fire, there’s nothing you can do but stand there and watch,” she said.

She said her road was not connected to Tamworth’s water network and that the region was in drought.

Police have set up a crime scene at the Bylong Road property.