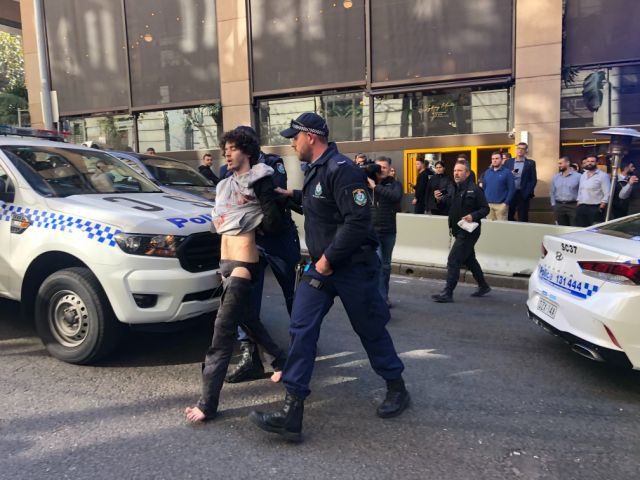 Mert Ney was arrested after a series of incidents in Sydney's CBD on August 14.

A Sydney man accused of murdering a sex worker, stabbing another woman and then running through the city’s CBD brandishing a bloodied knife is now charged with possessing child abuse material.

Mert Ney, who was restrained with chairs and a milk crate after the alleged violent acts on August 13, has been formally charged with possessing child abuse material on a USB during the attack.

He is also accused of possessing cannabis and being armed with a knife with intent to cause a serious offence.

The 21-year-old remained quiet as he appeared via video link before Central Local Court on Tuesday, when he was remanded in custody.

Mr Ney already faces charges of murder, attempted murder and wounding with intent to cause grievous bodily harm over the August 13 incident.

Police allege he killed Michaela Dunn, 24, in a Clarence Street apartment before stabbing Linda Bo, 41, in the shoulder at the Hotel CBD.

Mr Ney was later filmed allegedly running through the city brandishing a bloodied kitchen knife before lawyer John Bamford and others restrained him.

He’s also accused of choking a family member at Marayong on August 7.

The Blacktown man intends to defend the charges against him on the grounds of mental illness, Mr Khatiz has previously said.

Prosecutors told the court on Tuesday a substantial brief of evidence had been served on Mr Khatiz but further evidence was likely to be gathered from his mobile phone and medical records.

Facebook had also been issued with a mutual assistance request, the court was told.

That information is expected to be added to the brief of evidence by December 6, in time for Mr Ney’s next court appearance on December 10.

Uber and Royal Prince Alfred Hospital have already returned data after being subpoenaed for information.

An interim restraining order against Mr Ney, protecting one of his family members, remains in place.