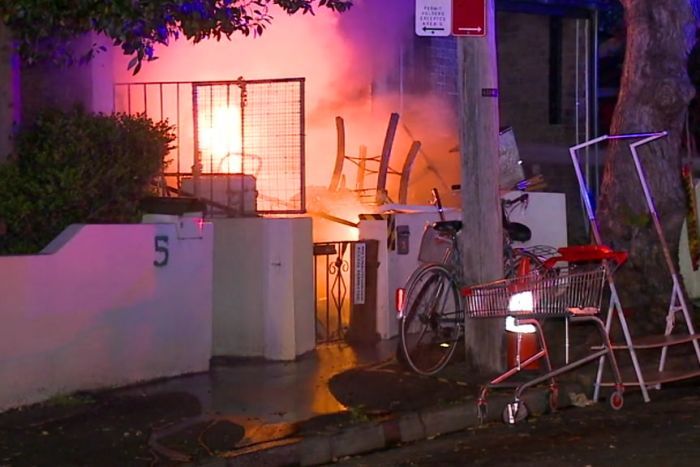 The owner of this house was taken to hospital after Monday night's fire. Photo: ABC

Police are hunting a firebug after five fires lit in an inner-Sydney suburb within hours of each other left a man in hospital and a vehicle destroyed.

The 70-year-old received a rude shock about 11.40pm on Monday when the terrace of his Campbell Street home in Glebe was set alight, forcing him to flee.

Kelvern Isdahl has told the Nine Network he was dozing when his smoke alarm went off.

“I walked to the front door, and then I saw the flames coming from the window, and the smoke. The smoke got me right in the lungs,” he said.

“If I’d have been asleep they would have been taking me to the morgue.”

Mr Isdahl was taken to hospital for observation but has since been released.

The blaze at his house followed earlier fires at a Norton Street shopfront, another one on a verandah in Campbell Street, and one in a garage in Derwent Lane.

Soon after, a car fire was discovered on nearby Westmoreland Street.

“[They were] very dangerous acts … particularly with the time of night and the ferocity of some of the fires that caused damage,” he said on Tuesday.

Detective Senior Sergeant Van Akker said no fire accelerant was used, and he didn’t know if multiple offenders were involved.

He said police were looking for CCTV or dashcam footage and requested local residents who might be able to assist come forward.

They have set up crime scenes at every blaze site, and started a joint investigation with Fire and Rescue NSW.

“It is a concern, but I can assure the public that police have committed a number of resources to assist and identify the offenders,” he said.

“At the stage … we believe they were random. There’s nothing to suggest they [were] targeted.”