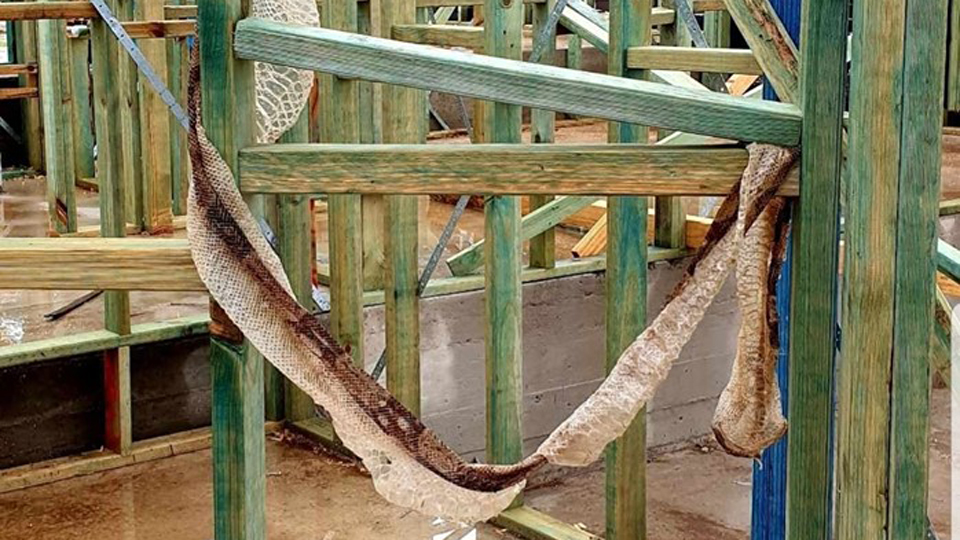 The boa constrictor skin was found on a construction site on October 9. Photo: Facebook

Residents of a western Sydney housing estate have been urged to be on the lookout for a 2.5-metre boa constrictor thought to be roaming free in the area.

The actual snake hasn’t been sighted, but a freshly shed snake skin was found on a construction site in the Silverdale estate on October 9.

The discovery prompted the NSW Department of Primary Industries to send warning letters to all residents of the Cascades Estate.

“[We are] in the process of trying to locate and capture the animal and … [request] that residents be on the lookout for it and report any sightings,” DPI assistant director invasive species biosecurity Scott Charlton wrote.

Australian Snake Catchers wrote on Facebook that it had been to the property to look for the snake.

“Any sightings of the snake should be swiftly reported,” it wrote.

“Do not attempt to capture this snake.”

Mr Charlton also urged anyone who spotted the missing boa constrictor to observe it – but not try to catch it.

Boa constrictors are native to Central and South America and are not venomous – they strangle and choke their prey. However, the DPI said they presented a significant risk to humans and native animals.

They are illegal in Australia outside of zoos.

The Sydney snake skin discovery comes just a week after a Cairns man found the remnants of a seven-metre python skin while on a morning walk near a creek.

Snake expert David Walton told the ABC that enormous skin appeared to belong to a reticulated python from South-East Asia. They are also illegal in Australia, outside of zoos.

Giant snake on the loose in Sydney’s west