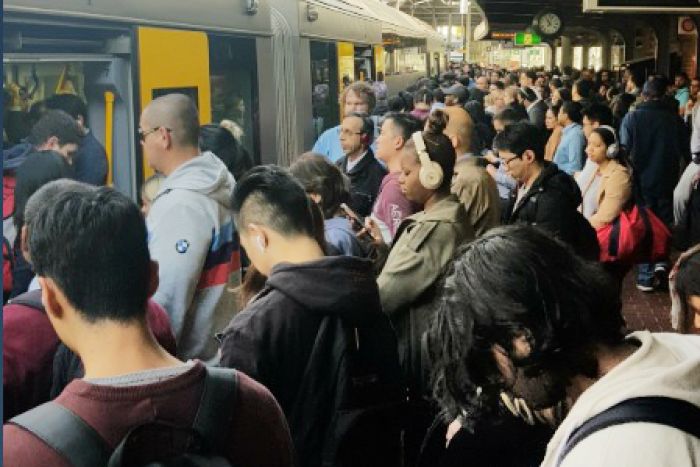 Sydney commuters were hit with a double whammy of technical failures on the train network on Friday morning as urgent repairs sent services into meltdown.

A signal failure at Wynyard caused delays of more than an hour on north shore services, while a broken-down train at Central hit the Eastern Suburbs and Illawarra line.

Passengers reported delays of about 70 minutes to get from Milsons Point to Wynyard with some claiming officials had advised them to walk across the Sydney Harbour Bridge instead.

Maarinke van der Meulen was among a group of people who decided to get out and walk over the Harbour Bridge from Milson’s Point station after they were told it might be quicker.

“People who were in a hurry were told to it would be quicker to get out and walk into town,” she said.

By lunch time, the network had largely returned to normal.

A steadier stream of pedestrians over the Bridge this AM after #sydneytrains passengers at Milsons Point were told it’s taking up to an hour to get to Town Hall, & recommended bus or a ‘walk over the Sydney Harbour Bridge’ as alternative and faster options. pic.twitter.com/2m9LvWmNOU

There were up to 100 passengers on the platforms at Bondi Junction Station when an announcer said a train at Central was “dead” and could not receive power.

Outside the station huge lines had already formed for buses and by 9am, an Uber ride from Bondi Junction to the city cost more than $70.

At nearby Edgecliff station a queue stretched from the main road back towards the platforms.

Travellers took to social media to complain about the latest delays to strike the network, calling the service “bloody hopeless” and “a routine joke”.

“It’s not a Friday in Sydney until a train breaks down,” said one Twitter user.

Elsewhere, another Twitter user complained of being stuck in a tunnel between Redfern and Central stations for more than 30 minutes.

The main affected services were the T1 line from Berowra, Emu Plains and Richmond and the T9 line from Hornsby, but delays had a widespread knock-on effect across city services.

The T2 Parramatta and Leppington service and the T3 Liverpool line were also running late.

Sydney Trains said the delay on the north shore lines were the result of a signal failure, which had been fixed.

It said it was running services on the line but delays would continue through the morning.

People were advised to allow more time for their trip.

The delays on the eastern suburbs T4 line from Bondi Junction were due to a train needing repairs at Central Station.