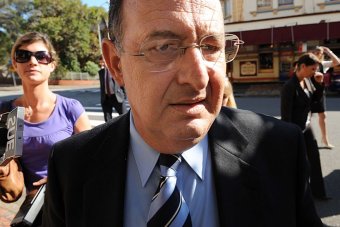 Orkopoulos was sentenced in 2008 to at least nine years and three months in jail for 30 child sex and drugs charges, relating to three boys in the Hunter Valley region and Lake Macquarie.

He became eligible for parole in 2017 but it was repeatedly refused because he did not take part in a sex offenders program.

Now that the intention to grant parole has been determined, all parties will have the opportunity to make submissions at a review hearing in four to six weeks.

The Orkopoulos case was a bombshell for the then-NSW Labor government.

His trial gave insight into his double life which involved having sex with minors and supplying them with cannabis and heroin.

When cross-examined by then-Crown Prosecutor Judge Helen Wilson – who is now a Supreme Court judge – there was a fiery exchange.

“You [were] publicly being one of our state’s lawmakers [while] in private being a law-breaker,” Ms Wilson said.

“If you put it that way, yes,” Orkopoulos replied.

At another point in the cross-examination, Ms Wilson asked Orkopolous whether he was smirking.

“My life is being destroyed by this,” he said.

He said the ex-minister had been “frequently arrogant and often flippant” in his evidence and made a number of false claims.

The former Aboriginal affairs minister was expelled by the Labor Party and then-premier Morris Iemma described the case as “sickening”.

Orkopoulos will appear via audio-visual link at the review hearing, which will be held in the coming weeks.

All other parties appear in person.

The authority said registered victims would be permitted to make verbal submissions.