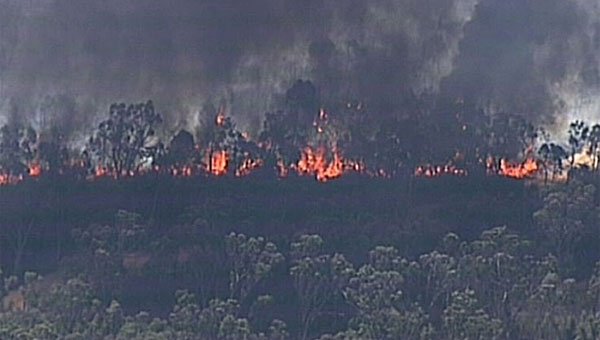 Firefighters are gaining the upper hand on an out-of-control bushfire in western Sydney as all blazes in the state sit at the lowest alert level.

The fire around Fire Trail Road in Castlereagh, near Penrith, was earlier subject to an emergency warning as it burned near homes.

By Friday evening, the alert level had been downgraded to advice.

“Conditions are easing on the fireground, fire activity is decreasing and firefighters are gaining the upper hand,” the NSW Rural Fire Service said.

Firefighters were assisted by waterbombing aircraft as they battled to bring the blaze under control.

The alert level for a fire that had been burning near properties at Tanilba Bay, in the Port Stephens area, was also downgraded on Friday evening.

However, temperatures are expected to rise again on Sunday and Monday, increasing the fire risk.

People around Tickner Street, Devlin Road and Richards Road were advised to take shelter as the fire arrives.

The fire burned for much of Friday afternoon. Text messages were sent to residents in Castlereagh and Londonderry after fresh winds sparked the fire up to renewed emergency levels shortly before 4pm.