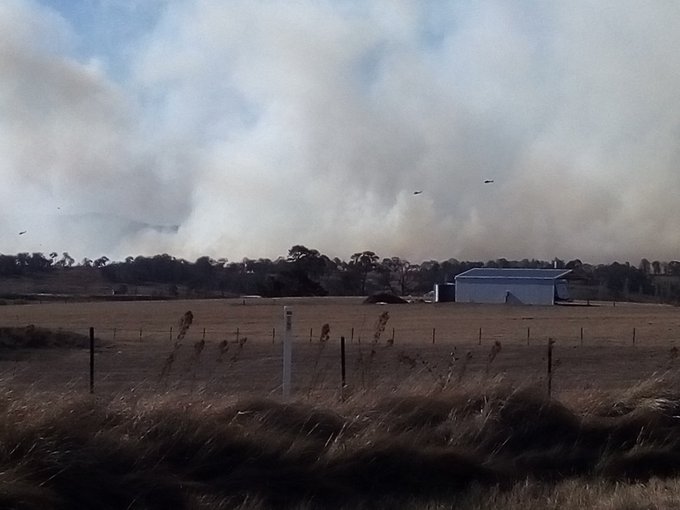 Nervous residents in a fire-ravaged region of northern NSW fear dams will dry up and life-saving water be even more hard to come by if blazes break out again.

Fire crews will on Monday morning begin the arduous task of scouring scorched land left by an “uncontrollable, unpredictable and fast-moving” fire that prompted an emergency warning at Tenterfield on Sunday.

They confirmed on Sunday night that structures had been lost, but they had been unable to identify whether homes were among those destroyed.

Locals in the drought-stricken farming area have for weeks been on edge since an initial blaze at the start of September signalled the start of an early bushfire season.

That fire claimed four homes and a shooting range in the town.

Residents want their local member Barnaby Joyce to visit the dried-up region and see the damage first hand, to get more government attention on their plight.

“He has an office here. I haven’t seen him in the office. I’ve knocked on the door. I drive past every day,” said one local, Jenny.

Another fire started about 10.45am on Sunday. The emergency warning was triggered about 2pm after a spot fire broke out ahead of the main blaze.

At its worst, the fire was threatening 20 to 30 homes, prompting NSW Rural Fire Service to tell residents to seek shelter.

One local, Gail Trounce, said she had watched helicopters fly over all day.

“There have been helicopters, planes constantly flying over the fire ground,” she told The New Daily.

“When there is the sniff of fire people do get worried, but firies are doing a top job.”

Several locals noted that their scarce dam water was being used to help fight the blazes in the drought-stricken town.

An essential move by firefighters, residents know, but agonising to watch for a town that was recently approaching ‘D-Day’ with its water supply.

“I believe they are trying to use water from the treatment works, also from the town supply,” resident Neil Luff said.

Tenterfield and surrounding areas have struggled under severe drought, with Rural Aid recently trucking in a mobile desalination plant to filter water drawn from a council bore.

Without the plant, which can provide 70,000 litres of drinking water per day, the town was expected to run out of water within 300 days.

Ben Shepherd from NSW Rural Fire Service said firefighters had no choice but to grab the closest water supply and stressed that each drop would be replenished.

“The firefighters will use the closest water source,” he said.

“Afterwards, the landholder can seek assistance to replenish it, but firefighters need to use the most urgent source so they can fight it.”

An emergency warning has been issued for a fast-moving bushfire. The out-of-control blaze is burning close to property near Tenterfield, a region ravaged by fires in recent weeks. Residents are being urged to seek shelter as it approaches. https://t.co/TWh1KQycs4 #7NEWS pic.twitter.com/3hpIqqtxoo

A spokeswoman for the Bureau of Meteorology said the dry winds pushing the fire eastwards would die down overnight, and Monday’s forecast should offer a reprieve for crews fighting the blaze.

“Into Monday night we’ll start to see these winds decreasing,” she said.

“During Monday we’re also looking at seeing rainfall, however, Tenterfield is at the edge of the area. If we do see showers they’re less likely to be significant amounts.”