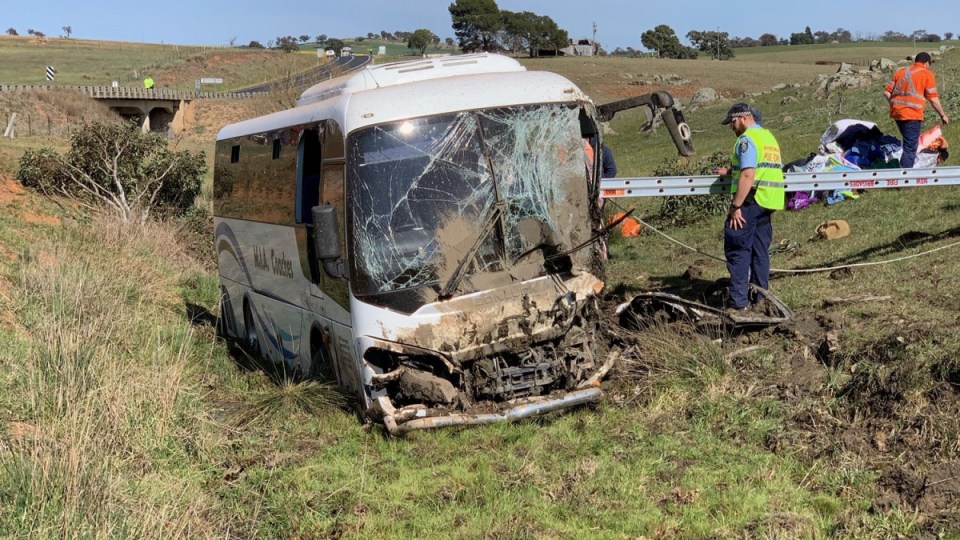 Paramedics are on the scene of a church bus crash in southern NSW. Photo: Twitter

A woman is in a critical condition and two boys suffered serious injuries after a church bus careened off the road and crashed in southern NSW.

A woman, believed to be 65, suffered serious head injuries, an eight-year-old boy was left with crushed legs and a 14-year-old boy is being treated for a broken leg. All were airlifted to Canberra Hospital.

Emergency services rushed to Burley Griffin Way in Harden, near Canberra, just before 8.30am Friday to reports that a coach had crashed.

The bus reportedly blew a tyre before losing control and veering off the road.

Seven ambulance crews arrived to find the white coach had smashed into a nearby paddock some way away from the road.

#UPDATE: Two patients have been airlifted to The Canberra Hospital. Paramedics are attending The Harden Hospital to assist doctors in treating patients and potentially transporting them for further assessment #nswambulance #harden pic.twitter.com/Y09o6Zru4y

Ambulance NSW said the bus was carrying 28 people, mainly children aged between 10 and 14.

Twenty-five bus passengers were treated for minor injuries and have been transferred to Harden Hospital.

Ambulance NSW Superintendent Mark Gibbs said it was a “confronting” scene for paramedics.

“Turning up to a job like this is really difficult, often you don’t know what to expect, especially when children are involved,” he said.

The bus, which was operated by a MIA Coaches driver, was carrying children and adults from a church group.

“It was brand new bus — it left Griffith around 6am and the 53-year-old driver told me that he lost control as he went over a bridge,” CEO of MIA Coaches Owen Brown told ABC.

“I have been in the business for 35 years and we’ve never had something like this happen in some 25 years.”

“It’s really awful to hear that these children and their families were injured — we are doing all we can to assist police.”

The driver is at the scene assisting police, with a crime scene set up and the major Crash Task Force was expected to attend.