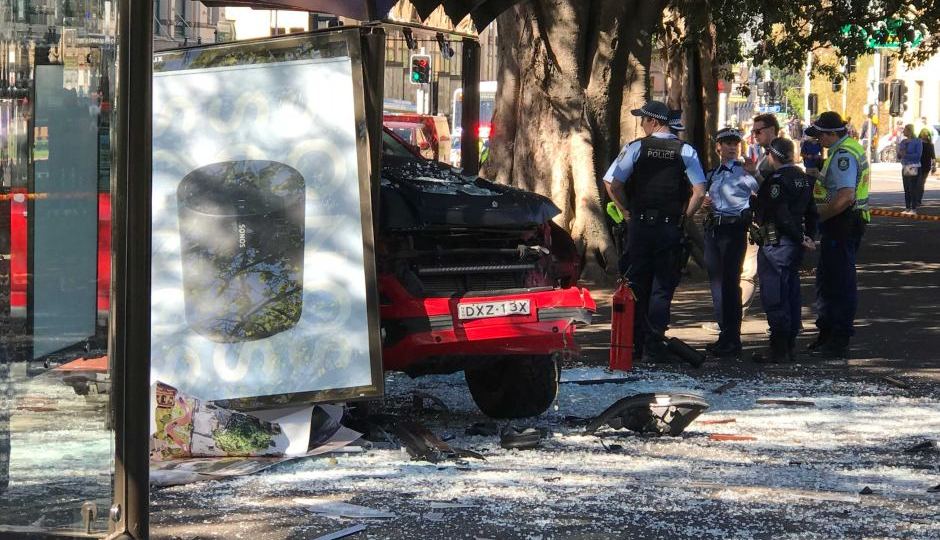 A man is in a critical condition and three others have been seriously injured after a ute crashed into a bus stop in inner Sydney.

Emergency services were called to the scene at Broadway after the accident on the corner of Parramatta Rd and Glebe Point Rd at 1.30pm on Tuesday.

Paramedics told the ABC they arrived at a “chaotic” and “highly emotional” scene.

Another man was taken to North Shore Hospital in a serious but stable condition and the male driver was taken to St Vincent’s Hospital with minor injuries and for mandatory testing.

The crash, in which a ute mounted the kerb at Victoria Park in Sydney’s Broadway, is not being considered as deliberate, NSW Police said in a statement.

NSW Ambulance Superintendent Katherine Railings said the situation paramedics “were confronted with was quite chaotic”.

“They’re not quite sure what they’re going to find, a vehicle into a bus stop can lead into a great number of patients,” she said.

“It was a very disturbing scene.”

Superintendent Rallings said 10 ambulance vehicles responded to the call around 1.30pm, including intensive care paramedics and a chaplain.

Police and firefighters were also on site.

“Paramedics did everything they could … it was a difficult job,” Superintendent Railings said.

“It was really challenging, quite emotional with four people injured and witnesses distressed.”

NSW Police have warned of traffic delays and advised people to avoid the area.

Fire and Rescue NSW tweeted that three of four outbound lanes on Parramatta Rd were blocked.