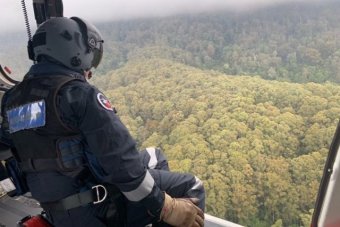 The wreckage of the four-seater Mooney M-20 has been spotted in rugged terrain near Coffs Harbour. Photo: ABC: Westpac Rescue Helicopter

A Gold Coast father and son have reportedly died after their small plane crashed into steep, forested terrain in northern NSW.

Police confirmed the deaths after reaching the crash site in the vicinity of Mount Moombil, west of Coffs Harbour on Saturday afternoon.

Earlier, NSW police and emergency services struggled to reach the wreckage of the four-seater Mooney M-20 after an aerial search located it in steep terrain.

The plane went missing almost 24 hours ealier after it dropped off NSW radar on Friday morning.

A search and rescue helicopter, a Westpac 4, located the wreckage about 6.30am on Saturday but conditions were described as “difficult”. They were unable to winch a person down to the wreckage due to low clouds down to ground level.

Police were knocking on doors around nearby Dorrigo to determine whether any locals had seen the plane in distress, the ABC reported.

Chief Inspector Peter Hayes told the ABC residents were shocked to hear a plane may have crashed nearby.

“They’re very surprised, it’s obviously a flight path that we’re looking at and aircraft go over all the time, but you don’t expect an aircraft to go down near you,” he said.

“It’s very thick terrain, this is the problem, thick and hilly so visibility from the air isn’t very good at all due to fog,” he said.

“Until the fog clears and we can have a bit of a look as to where the plane possibly went down, that’s were we stand at the moment,” he told the ABC.

The light plane departed Murwillumbah in northern NSW at 6.30am on Friday and was scheduled to arrive in Taree at 8am.

AMSA was alerted on Friday morning by the pilot’s associates concerned it hadn’t reached its destination.

Its last known communications were about 7.30am.