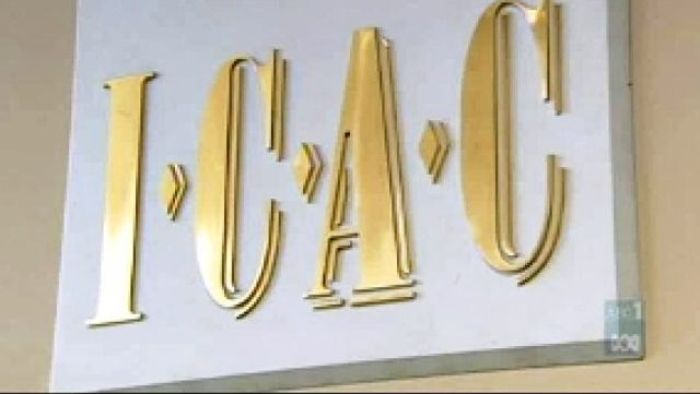 Dramatic scenes had unfolded at a corruption hearing in Sydney after a witness was caught trying to hide evidence during a bathroom break.

Restaurant worker Patricia Siu had admitted to faking two $5000 donations to Labor at the direction of her boss, aspiring Labor candidate Jonathan Yee, before the Independent Commission Against Corruption (ICAC) adjourned for the day on Friday.

But the hearing was suddenly recalled and Ms Siu was placed back into the witness box.

“Who did you call when you called someone from the bathroom during the morning tea break?” he asked.

“My brother-in-law,” she replied.

Ms Siu then admitted she had asked her brother-in-law to go to her home and find two pink folders containing evidence the ICAC had demanded.

Mr Robertson: “Why did you tell your brother-in-law to put away those folders?”

Mr Robertson: “You wanted to impede this commission’s investigation … do you agree?”

Mr Robertson: “You wished to hide the very document the Chief Commissioner asked you to produce, is that right?”

Ms Siu was ordered to hand over her phone and passwords.

There has been no explanation as to how the commission knew Ms Siu had made the call.

The ICAC is investigating whether fake donations from restaurant workers were used to disguise a $100,000 payment to Labor from billionaire Huang Xiangmo, in 2015.

Earlier in the day, Ms Siu told the hearing Jonathan Yee had given her a list of false statements she should tell ICAC investigators.

She also said he had logged into her email and sent false responses in her name.

‘Between a rock and a hard place’

Ms Siu was one of several employees or former employees at the Emperor’s Garden restaurant in Sydney’s Chinatown who were under investigation by ICAC.

The NSW Electoral Commission records showed she made one $5000 donation to NSW Labor and one $5000 to Country Labor during a Chinese Friends for Labor dinner in 2015.

The counsel assisting said Ms Siu’s donation was a highly implausible amount for a restaurant worker, and was one of the key factors which lead to the corruption investigation.

“She just got stressed about, that’s she’s not telling the truth about it,” Valentine Yee told the inquiry.

“She was really mulling over whether to tell the truth or not in regards to this matter.”

Valentine Yee admitted to the inquiry that he made a false donation after initially denying those claims.

ICAC said it would not be commenting while the public inquiry was underway.