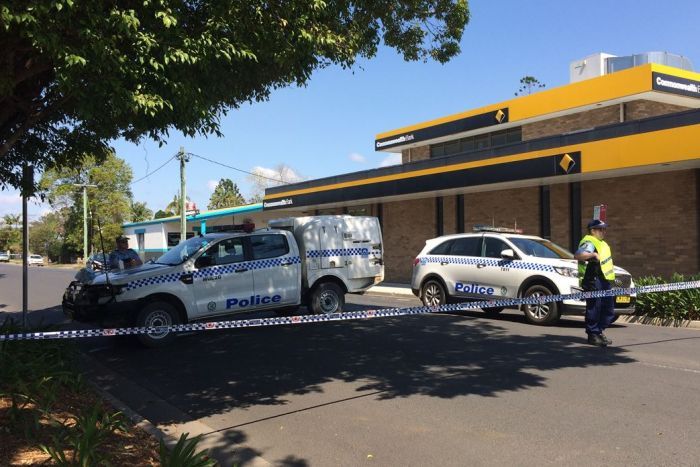 Police cars outside the bank branch. It has been evacuated, as have surrounding buildings. Photo: ABC

Parts of the northern NSW town of Mullumbimby have been shut down for most of Thursday and people evacuated after the discovery of a suspected bomb.

A police bomb response team was to Mullumbimby, after a “suspicious package” was discovered near a bank in the quiet northern NSW town about 7.30am on Thursday.

Police have urged people to avoid Burringbar Street and Station Street, and established a 200-metre exclusion zone around the town’s Commonwealth Bank branch.

Additional resources, including a rescue and bomb disposal unit, have been sent to Mullumbimby.

Detective Chief Inspector Matt Kehoe said police had received “no threats, no calls, no letters, no other information” about the object, which was found by local shop owner Mark Thomas. who contacted them.

“We can just go on the fact that the device was located where it was and we’ve taken all precautions to make sure the community is safe,” Det Chief Inspector Kehoe said.

“We are certainly treating it as a real device.”

“It’s just the shape and what it looks like – it certainly looks like an IED,” he said.

“Our investigations are ongoing.”

Police said the operation would last for “some hours”.

Mr Thomas, who found the suspicious object near his shop, said it was like a metal pipe, at capped either end with “circuit-board-looking stuff and a switch”.

“I couldn’t see it properly so I rolled it over, ‘oh yeah, looks like someone has made a bomb for Halloween but, you know, could be real so better call the police’, and so here we are,” he told the ABC.

“It’s Mullumbimby. No one wants to blow up Mullumbimby, I don’t think.”

The Commonwealth Bank said early on Thursday that staff and customers had been evacuated from its Mullumbimby branch.

“Police are investigating the incident and we are cooperating with them fully,” a spokesperson said.

The Byron Shire Council offices and other surrounding buildings were also evacuated.

Nearby schools and childcare centres were also locked down for several hours on Tuesday. The threat was later revealed to be a hoax.

NSW Police have said there are no apparent links between the two incidents.