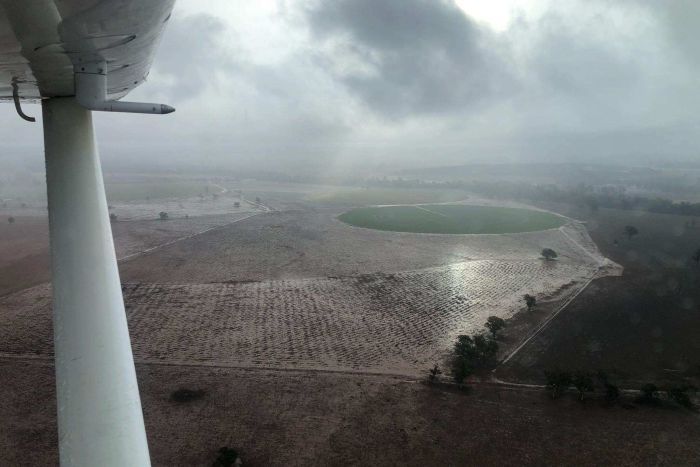 Rain has fallen in some parts of western NSW but farmers in the most critically dry areas have been left disappointed after failing to receive a single drop.

The trough has delivered the biggest falls to Sydney and the Hunter region, with Sydney Observatory Hill recording about 61.2 millimetres and Gosford receiving 63 millimetres in the 24 hours from 9am Tuesday to 9am Wednesday.

The rain also travelled west, with good falls around the Blue Mountains – Blackheath received 38 millimetres. But as soon it hit the Great Dividing Range it thinned out.

Frustratingly, those in dire need of rain in the upper west and north west of NSW, including Tamworth, Bourke and Moree, missed out.

These falls are not drought-breaking but have put much-needed water back in the dams and given farmers hope that there might be pasture growth.

“It does sound lovely, and some of it will help in water storage, but it may not get into the soil,” Ms Reid said.

“If it can’t penetrate the soil, it doesn’t make a difference.”

In the central west, Wellington got 17 millimetres and Coonabarabran Airport had 6.6 millimetres fall.

In the lower western region, the rain teased Pooncarie (3 millimetres) and Menindee (2 millimetres), where substantial rain has not fallen since July.

“For a lot of producers it’s disheartening because it’s come late and also it’s not been a big rain system and it’s followed several very small rain systems for the slopes and plains,” he said.

“For the past couple of months there’s hardly been much rain at all.”

Mr Reynolds said producers needed 150-200 millimetres of steady rain in the next two to three weeks if there was any chance for late pasture growth.

“For a lot of producers it’s probably getting too late, even though we’re only in mid-September,” he said.

There was more rain in the north of the state, but unfortunately it did more harm than good on the firegrounds around Drake and Dorrigo, where 5 millimetres fell.

The Rural Fire Service said the small amount of rain did not affect the fires and instead turned fire trails into mud.

The trough will continue to extend down the NSW coast until Thursday before moving away. The weekend will bring another cold front.