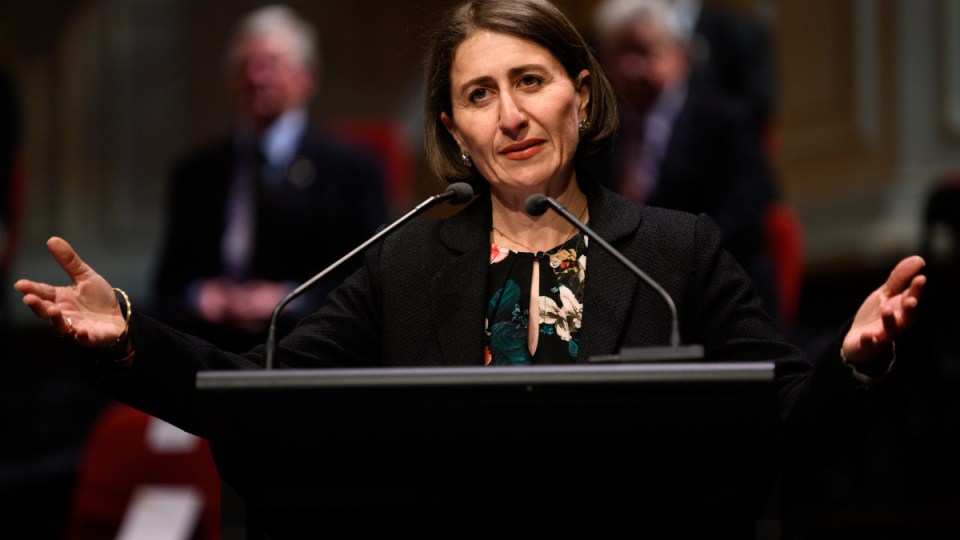 NSW Premier Gladys Berejiklian is facing an “empty chair” leadership challenge from Liberal MPs plotting revenge over her decision to allow a free vote on abortion.

Three Liberal MPs leading the charge to spill the leadership declared on Monday night that it was a direct consequence of her decision to allow a free vote on abortion which they described as “unacceptable”.

A spokesman for Ms Berejiklian said on Monday night there was “no comment’ on the move to spill the leadership.

The first female premier elected by voters, who won a four-year term in March, is not facing a political challenger at this stage.

But an “empty chair” challenge, which could involve the prospect of a significant number of MPs lodging a protest vote against her leadership, would weaken her authority.

Gladys is the people’s choice as Premier and I support her as our leader. #nswpol

Senior Liberals predicted the call to dump Ms Berejiklian is likely to fail, expressing shock that MPs would move to knife her just months after she won an election.

“Spill motion will fail comprehensively, but will disturbingly highlight the fanaticism of a very small section of the party who claim to be Christian,” a NSW Liberal told The New Daily.

The move to spill the leadership is being touted by religious conservatives opposed to the decriminalisation of abortion in the state of NSW.

Abortion remains on the Crimes Act in NSW, which means although widely available in theory, in strict legal terms it remains a criminal offence to obtain or perform an abortion.

Ms Berejiklian has allowed all MPs a free vote, based on their conscience, and not instructed MPs how to vote.

“Three weeks ago it was made clear to the premier and the government that at an absolute minimum, four key amendments were required to the abortion bill to ensure continued membership of the Liberal Party room – a prohibition on sex-selection abortions, proper medical care for aborted babies born alive, protection of conscientious objection rights for doctors and allied health professionals and stricter regulation of late term abortions,” the statement said.

“At 7.50pm tonight we were informed all the amendments were rejected in full or in part, with vague undertakings for further discussions in the morning. This is simply unacceptable after waiting for three weeks for a response.

“Since the announcement on 1 August 2019 that the abortion bill would be introduced to Parliament by the Independent Member for Sydney, Mr Alex Greenwich, we have been bewildered by the lack of any regard for proper parliamentary process, particularly the failure to allow members any meaningful consultation with their local communities.

“We have respectfully and consistently requested the premier to urgently intervene to restore proper process by stopping the fast-tracking of the abortion bill and immediately establishing a joint select committee into abortion law reform in NSW. These requests have been rejected.

“We have come to the conclusion that the right course of action is not to leave the Parliamentary Liberal Party but to hold the premier to account for presiding over this shameful process.”

Ms Davies’ claims that legalising abortion could lead to “gender selection” abortions have been rubbished by the authors of a report she sought to use to claim evidence of Chinese and Indian parents terminating pregnancies when they found out they were having a girl.

The statement also references claims, leaked to NSW newspapers on Monday, that Ms Berejiklian is losing favour with the conservative crossbench.

“We have also been alarmed by the premier’s continued failure to address the impasse in the Legislative Council, which has slowly ground the government’s legislative agenda to dust. This position is also untenable and must be urgently resolved for the good government of this state,” the statement said.

“It is only with new leadership that we can again move forward as a united team delivering for the people of NSW.”

Previously, Ms Davies and Kevin Conolly have threatened to quit the party and sit as independents over the premier’s decision to allow a free vote and repeatedly demanded she instruct MPs to vote.

The rebel MPs do not have the numbers on the floor of Parliament from other MPs to pass the amendments.

NSW is the last state in Australia to decriminalise abortion.