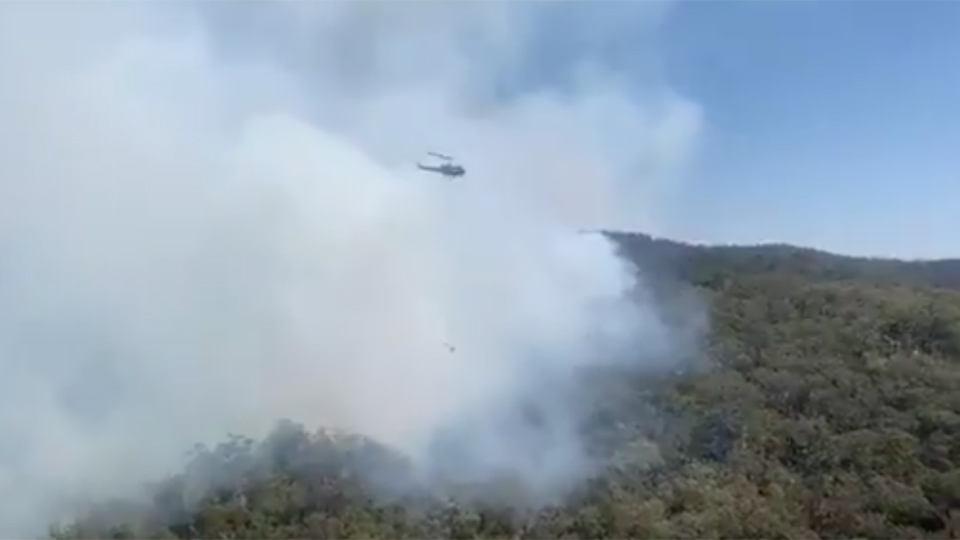 The Tenterfield blaze has burnt more than 50,000 hectares, and was again threatening homes on Monday afternoon. Photo: Twitter/NSW RFS

An emergency warning has been issued for a persistent fire burning in bushland near Tenterfield in northern NSW, with warm westerly winds and higher temperatures again stoking the blaze.

The fire at Drake has burnt almost 58,000 hectares of land and remains under control, but is posing a greater risk to towns north of the Bruxner Highway, including Drake, Red Rock Road and Rover Park.

The southern edge of the fire, meanwhile, is burning towards the Poverty Point, Surface Hill and Sandy Creek areas.

Residents have been informed to take shelter as the fire approaches.

Fire conditions across NSW eased on Sunday, with firefighters gaining the upper hand on a number of blazes.

But Monday’s weather – including strong wind warnings up and down the NSW coast – is causing fresh headaches.

EMERGENCY WARNING: Long Gully Rd, Drake (Tenterfield LGA) Firefighters on the ground, assisted by the Large Air Tanker, are working to slow the progress of the fire on the northern edge. #nswfires #nswrfs https://t.co/BbCsfzTR1b pic.twitter.com/yDrgDdpvWo

A watch and act alert has also been issued for an out-of-control 11,000-hectare blaze 15 kilometres east of Glen Innes in the Brother State Forest.

Residents in the area of Newtown Boyd and Wytaliba have been told to watch out for embers, monitor for spot fires and take the advice of firefighters.

The NSW Rural Fire Service on Sunday said favourable conditions for firefighting would not return until Wednesday.

Fire crews have retained the upper hand on a 92,000-hectare bushfire burning in Bees Nest near Armidale that is at advice alert level.