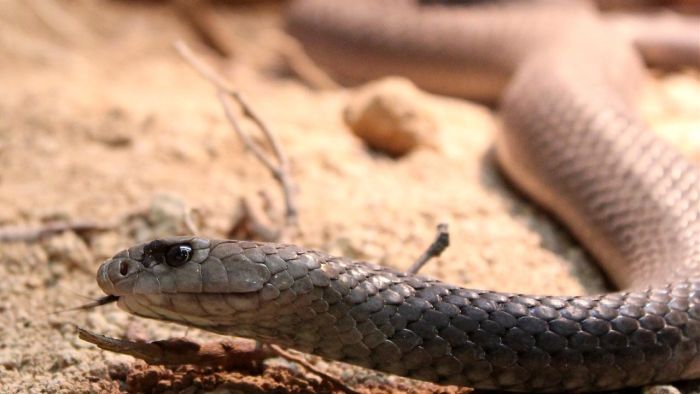 Residents on the east coast of Australia have been warned snakes are already on the move.

Startling discoveries of snakes in ovens and under couches could become more common in Australian homes as rising temperatures force the reptiles to seek new habitats earlier than usual.

While October and November are usually peak snake season, increasingly warmer weather means snakes are becoming active as early as this week.

The Australian Reptile Park’s head of reptiles Daniel Rumsey said it was unusual to see snakes this early in the season.

“Anything between 20 to 35 degrees is ideal for snakes in New South Wales or Queensland,” Mr Rumsey told The New Daily.

Temperatures in Brisbane this week are expected to reach nine degrees above average, while parts of Sydney could push close to or even above 30 degrees.

Mr Rumsey said suburban homes were enticing for snakes in spring because they provided shelter and “cheap meals” in rats and mice.

“I’ve got stories of snakes hiding away in cupboards and couches, moving across beds at night and even hiding in people’s shoes,” Mr Rumsey said.

“One lady called because she found a carpet python in her top drawer… and (another time) I found a snake in a man’s bathroom hanging on the shower curtain rail.”

Victorian farmers are already starting to spot snakes slithering through their paddocks, with one sighted in the small town of Glenburn on Tuesday.

In southeast Queensland, professional snake catcher Stuart McKenzie said his team at Sunshine Coast Snake Catchers 24/7 had already been called out to 24 jobs this month.

“It’s really started to get busy in the last week,” Mr McKenzie told The New Daily.

The expert snake catcher said it was “very common” to find carpet pythons slithering around in the roof spaces of suburban homes in this part of the Sunshine State.

“About one in every three or four houses has a snake in the roof space,” Mr McKenzie said.

“I’ve caught them everywhere – in the back of ovens, on top of fridges, in a bedroom closet and even under dishwashers.”

But non-venomous snakes, like carpet pythons, are the least of Queenslanders’ worries.

Fast-moving and notoriously aggressive, highly venomous brown snakes are responsible for more deaths every year in Australia than any other group of snakes.

“Temperature affects animals in many of the same ways in which it affects humans – it makes us seek out different microhabitats,” Professor McGeoch told The New Daily.

“In same way that we look for cool spots when it’s hot, animals do the same thing.”

Unlike warm-blooded animals such as possums, Professor McGeoch said snakes were unable to regulate their own body temperature so they needed to find places that were comfortable for them.

“Because it’s warming generally, and snakes tend to be more active under certain ranges of temperature, we’re possibly finding they’re becoming active earlier in the year than usual,” she said.

“The seasons are no longer as cold, so snakes can be active for longer.”

“Australian temperatures have risen by about a degree in the last 100 years or so,” Dr Gallant said.

Though snakes are becoming more active sooner, Mr Rumsey said it was important to remember that snakes saw us as a potential threat and not as a food source.

“The majority of snake bites occur when people try to catch snakes themselves,” Mr Rumsey said.

“As long as we don’t try to catch them ourselves, we should be fine.”

Rising temperatures get snake season off to an early start