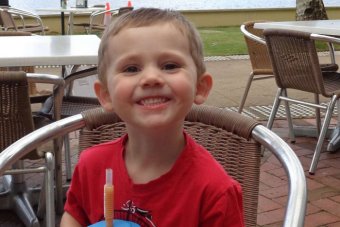 William Tyrrell was in foster care when he disappeared. Photo: NSW Police

The wife of whitegoods repairman Bill Spedding has told the inquest into three-year-old William Tyrrell’s disappearance she was with her husband drinking coffee about the time the boy went missing.

The NSW Coroners Court on Monday also heard of the shock Margaret Speeding suffered as police raided her home in early 2015 in the search for the young boy.

William went missing from his foster grandmother’s home in Kendall on NSW’s mid-north coast about 10.15am on September 12, 2014.

Mr Spedding, who was among hundreds of so-called persons of interest in the suspected abduction, has always vehemently publicly denied any involvement and has never been charged.

Ms Spedding told the inquest that on the day William went missing, she and her husband had arranged to go to a primary school assembly in Laurieton, a town about 15 minutes away from Kendall.

Before that assembly, where a child in their care was to receive an award, the couple met for coffee about 9.30am at a cafe across the road from the school and near to Mr Spedding’s office, she told the inquest.

A receipt shown to the inquest showed the Speddings’ joint account was used to purchase a ham and cheese croissant, a citrus tart and two large cappuccinos about 9.45am.

The inquest was also shown a video of Ms Spedding retracing her movements from the cafe to the school that day.

By the time that video was filmed in February 2015, police had already searched the Speddings’ home and business, drained their septic tank and taken a number of items to be tested.

“We were in shock when this took place,” she told detectives in the video.

“We couldn’t believe this was happening to us.”

No forensic evidence linking Mr Spedding to the boy’s disappearance was found.

‘Spedding with wife’ when Tyrrell taken