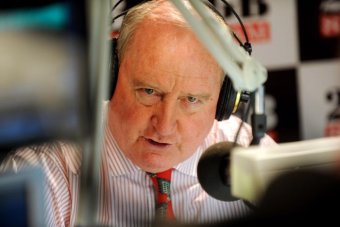 Radio shock jock Alan Jones has been put on notice and told he will be sacked if he continues offensive comments like the ones he made about New Zealand Prime Minister Jacinda Ardern.

The warning from Macquarie Media chairman Russell Tate on Saturday night signalled the strongest public statement from 2GB radio bosses since Jones controversially said on-air Ms Ardern should have a sock shoved down her throat.

Mr Tate confirmed he had “advised” Jones his offensive commentary must end.

Jones initially stood by his comments, and even repeated the attacks on Ms Ardern on-air.

But on Friday night the 78-year-old veteran of the airwaves finally apologised. The mea culpa came after sponsors started pulling their advertisements.

Jones acknowledged his comments were “careless, unnecessary and wrong” and apologised to Ms Ardern.

“Notwithstanding his apologies, I have today discussed the matter with Alan and advised him that any recurrence of commentary of this nature will result in the termination of his contract,” Mr Tate said in a statement.

chairman of Macquarie Media (owner of 2GB), releases a statement on Alan Jones and Jacinda Ardern: notes Jones’ apologies but says he told the host “that any recurrence of commentary of this nature will result in the termination of his contract” pic.twitter.com/eIvRQPsZHh

“I just wonder whether Scott Morrison is going to be fully briefed to shove a sock down her throat.’’

The comments were slammed by prominent figures including Mr Morrison and former prime minister Malcolm Turnbull. But Jones doubled down, further criticising Ms Ardern whom he labelled a “hypocrite” for her climate change discussions.

By Friday night, however, he had issued a grovelling on-air apology.

The “sock down her throat” controversy is certainly not the first time advertisers have boycotted 2GB over Jones’ offensive rants. But it seemed in the past the station was willing to weather the storm – and cover the associated legal costs that came with the inevitable defamation claims.

But Jones hasn’t always apologised over the air – nor behind-the-scenes, as he says he has this time by writing to Ms Ardern.

The list of controversies includes the 2012 on-air attack of then-prime minister Julia Gillard when he told listeners she should be “put into a chaff bag and thrown into the sea’’.

The attacks on Australia’s first female PM didn’t end there; Jones was later covertly recorded at a Young Liberal function suggesting that Ms Gillard’s father, John – who had recently passed away – had ‘‘died of shame’’ over his daughter’s ‘‘lies”.

The “chaff bag” comment attracted widespread criticism and complaints to the media regulator, which ultimately found he was not in breach of standards.

In 2007, the Australian Communications and Media Authority (ACMA) had not been so forgiving. It found that two years earlier, in the lead-up to the Cronulla riots, Jones was responsible for racial vilification and the broadcasting of material likely to encourage violence when he spoke about young Lebanese men at Sydney’s The Rocks.

He made a public apology in 2012 but the Tribunal ordered it was “inadequate” and ordered him to make another statement on-air.

ACMA has also previously criticised Jones for failing to give accurate information about the environment and climate change.

Other mistakes have cost 2GB big bucks and seriously wounded Macquarie Media which was recently bought by Nine for a steal. In September, Macquarie and Jones had to cough up $3.75 million – plus the legal fees – for a defamation verdict over his repeated and very serious attacks on Toowoomba’s Wagner brothers.

As The New Daily reported last week, the company’s 2018-19 accounts contain another hefty provision for “legal claims expense” – $3.2 million – which carries forward into this financial year.

The annual report explains: “Provision for claims totalling $3.2 million (2018: $3.0 million) relate to potential liabilities for defamation settlements. Given the nature of these claims, there is significant judgement and estimation required in determining the appropriate provision.”

Looking at their books, Nine may be forced to rethink whether the shock jock shockers are worth it after all.

Final straw for 2GB radio: Shock jock Alan Jones will be told to shove it … next time