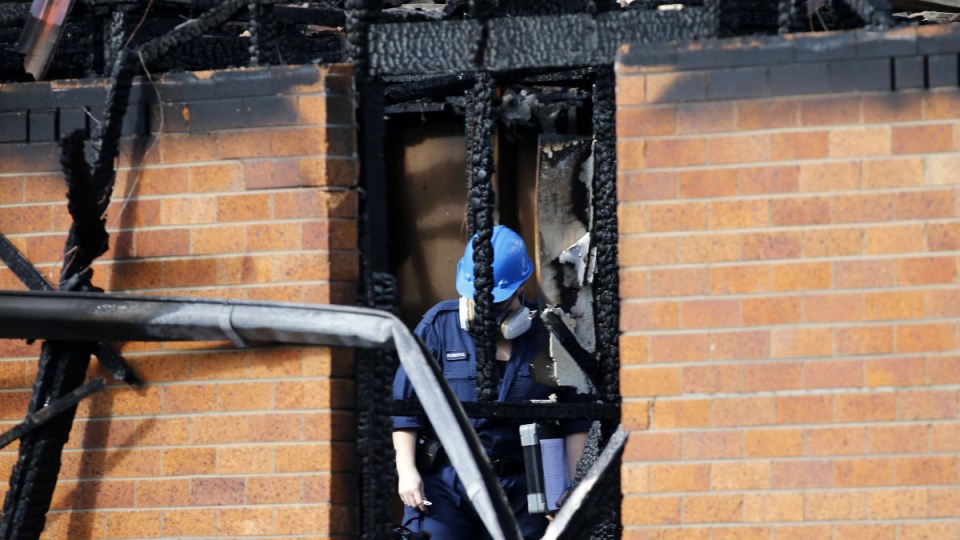 Fire investigators at the Singleton house where the Atkins children died in 2019. Photo: AAP

Firefighters and neighbours were beaten back by flames as they tried to save a family from a house fire in the NSW Hunter Valley that left three children dead and a town devastated.

Locals are now scrambling to raise money for the family that lost five-year-old twin girls and an 11-year-old boy in the blaze in the early hours of Wednesday.

Authorities are investigating whether the fire started in the fireplace of the Singleton home, which was left completely gutted.

Crews broke through windows to rescue the young girls from their smoke-filled bedrooms just seconds before they were engulfed by flames.

The pair were rushed to Singleton Hospital but died soon after.

Their older brother was found dead in the burned out home.

People close to the event and media outlets identified the twins as Matylda and Scarlett and their brother as Blake.

First responders managed to rescue the 31-year-old mother, named as Kara Atkins, and her eight-year-old daughter and both were treated by paramedics before being taken to hospital.

The woman suffered burns to her back and forehead and her daughter, Bayley, was treated for smoke inhalation. Both are in a stable condition.

“The whole town is devastated by the news,” family friend Caitlyn Stemmer said on Wednesday.

“It’ll be a hard thing for everyone to get past.”

Ms Stemmer started a GoFundMe campaign for the family in the hours following the blaze but is still in shock.

“The family will need to rebuild their lives and home, any help will be forever appreciated,” she wrote on the fundraising page, alongside a picture of the children in their school uniforms.

The appeal raised almost $20,000 within its first few hours.

Ms Stemmer said the family are “tight-knit”, describing Ms Atkins and her partner as hardworking and caring parents.

“This may be a message for people to cuddle their kids for a little longer today,” Ms Stemmer said.

“I would like to emphasise the heroic nature of the four residents in the nearby vicinity who tried to assist the people inside the house and importantly got the mother and eight-year-old out,” he said.

Early investigations suggest the fire started at the front of the house before spreading to the back of the home.

Fire and Rescue NSW Superintendent Joshua Turner confirmed there was a fireplace inside the property, but it was too early what happened.

Smoke detectors were installed in the home and did react.

“With the intensity of the fire … the neighbours and those that attended and tried to assist did a pretty incredible job,” Superintendent Turner said.

Among them was neighbour Brock Forbes, who along with his family were woken by a “big bang” and tried to fight the blaze until fire crews arrived.

“[We heard] just smashing and screaming so we ran out and grabbed the hose,” he told the ABC.

“I was trying to put the fire out and trying to save them and firefighters came and got it under control.”

Police, paramedics and firefighters admitted it was a tough and distressing time for crews, as it was for tight-knit locals.

“These things tear at the heart of a local community like Singleton,” Superintendent Gillies said.

“Our heart goes out to the family and loved ones of those victims,” she  said.