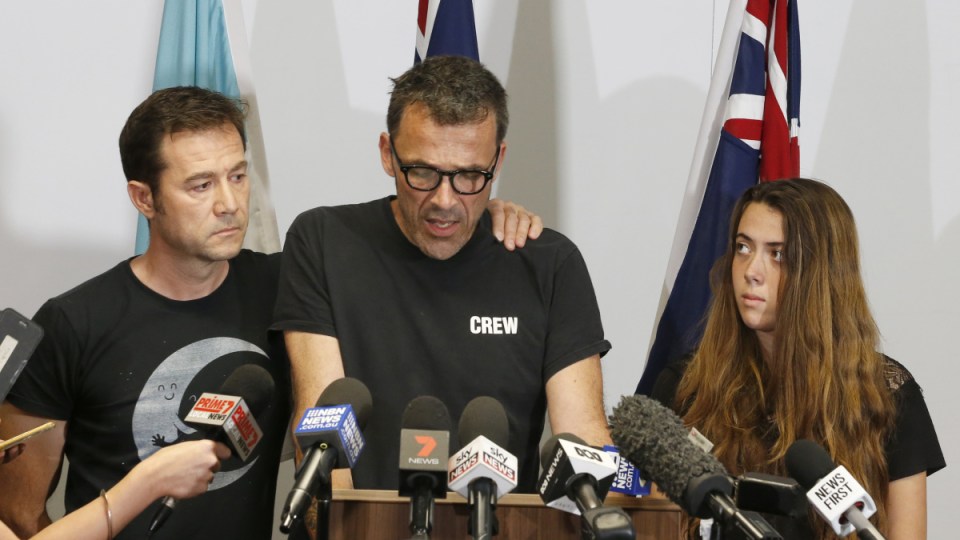 The distraught father of a Belgian backpacker who went missing in northern NSW more than a fortnight ago has made an emotional plea for access to his son’s WhatsApp account, believing it could hold the key to his whereabouts.

Laurent Hayez, the father of Theo Hayez, broke down in tears on Monday as he begged for help to find his son, who went missing from Byron Bay.

Police admit they are “baffled” by the 18-year-old’s disappearance, with no clear leads or information on his whereabouts.

The teenager was last seen leaving the Cheeky Monkey’s bar in Byron Bay about 11pm on May 31. He had been in the northern NSW town for less than 24 hours.

“I promised Theo’s little brother that I would bring his brother home. Please, help me keep my promise to him,” Mr Hayez Sr said through tears at Tweed Heads Police Station on Monday.

“If you have any information and if you do not want to deal with the cops, or if you are afraid to come forward, please make an anonymous call to Crime Stoppers.”

He said it was believed Theo had used encrypted messaging service WhatsApp on the night he disappeared. He pleaded for help in getting access to the messages.

“We understand the politics about confidentiality and respect that – however, this is a question of providing assistance to a person in grave danger,” he said.

Theo Hayez was caught on CCTV footage about 7.45pm on the night he disappeared, buying alcohol in a bottle shop.

The young Mr Hayez, who was preparing to return home after eight months travelling around Australia, was reported missing on June 6 when he failed to return to his hostel and couldn’t be contacted.

His passport and other personal belongings had been left untouched in his room.

Mr Hayez Sr arrived in the country late last week and spent the weekend helping with the search, which on Monday was focused on the area around the Byron Bay lighthouse.

Superintendent David Roptell said police were inquiring with WhatsApp and its owner, Facebook, about accessing the messages.

While homicide detectives are helping the investigation, as well as Belgian authorities, Superintendent Roptell said he was still hopeful that Theo was alive.

“We’re just not clear at this point,” he said.

“It appears to be out of character. He was intending to go home. It’s baffling as to what’s occurred, but we’re not ruling anything out.”

WhatsApp said it was providing information to law enforcement, but was limited in the data it could access from Theo’s encrypted conversations.

“We understand the important work being carried out by law enforcement and are assisting them in accordance with applicable law and our terms of service,” a WhatsApp spokesman said.

WhatsApp is able to access and disclose only some information, which can include a user’s name, last seen date, IP address and basic information but not the content of messages.

Laurent Hayez thanked police, volunteers and the community for their help in looking for his son, as well as those who raised money to support the search.

He said any money not used to find Theo will be donated to charities in Australia and Belgium dedicated to finding missing people.

Superintendent Roptell said it was “heartbreaking” that investigators did not have any fresh leads to share with Theo’s family but promised not to leave any stone unturned.