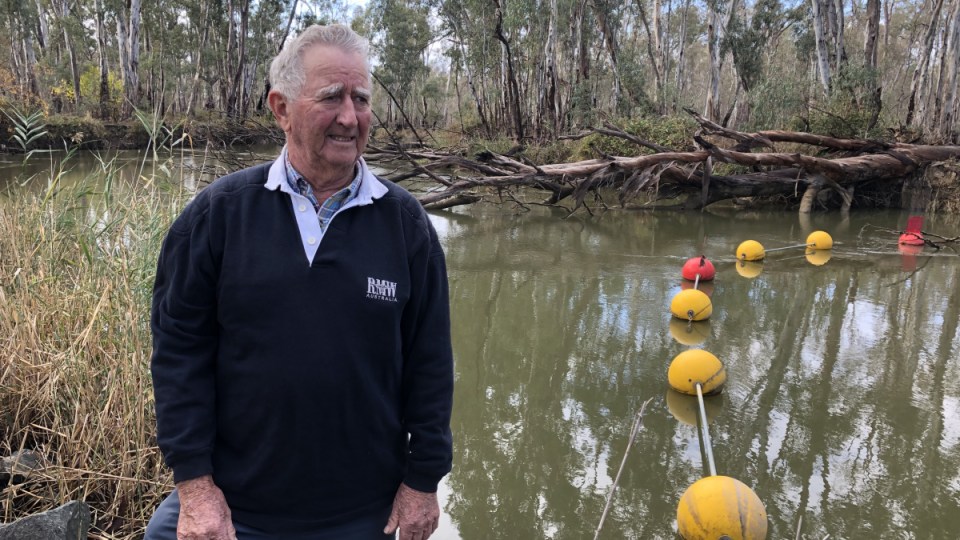 An extraordinary amount of deliberately “lost” water – the volume of Sydney Harbour – is being blamed for the extreme hardship faced by hundreds of Murray River farmers struggling to survive on zero water allocations.

Reece Glenn, a small irrigator who has worked his property at Mathoura, in the Murray Valley between Echuca and Deniliquin, since 1946, is one of countless family businesses driven near bankruptcy, a result he says of the “reckless mismanagement” of the Murray.

“I’m disgusted they pushed so much water down, knowing a lot of it would be wasted,” Mr Glenn said.

“The almond farmers downstream have the deep pockets. They come first. All us smaller operators are cast aside.”

In the midst of a drought, the Murray Darling Basin Authority (MDBA) released high volumes from the Hume Dam for five months until January to deliver water bought by large-scale, mostly foreign-owned, almond plantations near South Australia.

Over 141 days, prolonged flooding at the narrow ‘Barmah Choke’ sent a reported 536 megalitres into the Barmah forest, an “icon site” of river red gums, protected under the international Ramsar Convention.

“While everyone else in the basin was dealing with drought, the MDBA created a flood and lost large volumes of water,” said Maryanne Slattery, senior water researcher for The Australia Institute.

According to the progressive think tank, whose calculations using river-flow data are contained in its latest scathing report of water management, the MDBA’s decision to prioritise almond plantations damaged the forest and significantly reduced the amount of water available for production.

“We estimate an allocation of between 16 per cent and 61 per cent could have been possible had the MDBA complied with its official objectives and outcomes,” Ms Slattery said.

The financial impact on hundreds of small irrigators and their dependent communities has been huge, with the drought forcing up the price of water on the temporary market to record levels.

The 300-strong Wakool Landholders Association of Victoria claimed the MDBA is also ignoring the environmental impacts of pushing too much water through narrow sections of river.

“In its rush to deliver water downstream to permanent plantings, the MDBA has shown no concern for efficiency of delivery or environmental damage. It has increased carp numbers and salinity and decimated native flora and fauna,” the association’s chair Darcy Hare said.

The flooding of Australia’s largest river red gum forest during one of the hottest summers on record conflicted with the MDBA’s obligation to protect what it regards as one of the most ecologically valuable sites in the basin.

“It cued annual bird breeding at the wrong time so young birds couldn’t grow to fledglings and leave their nests”, says Chris Norman, CEO of Victoria’s Goulburn Broken Catchment Management Authority (GBCMA), which manages environmental water for the benefit of the Goulburn, Murray and Broken rivers.

“The forest needs winter/spring flooding to generate its unique Moira grass growth and stimulate bird feeding and breeding. Inundating the grass over summer drowns the seeds.”

The same concerns are shared by environment groups.

“This very important site has been degraded. The unique grass is going. New red gums and rushes are moving in to replace it. This is a direct result of the MDBA putting unsustainable water trade above all else,” Environment Victoria’s Juliet Le Feuvre said.

Under the Ramsar Convention, Australia must report threats to the unique ecological character of a listed wetland.

But the responsible body, the Commonwealth Environmental Water Office, claims the forest benefited from extra water it received in 2018.

On the nearby Goulburn River there’s no dispute over the negative impacts of similar high summer flows from the Eildon reservoir.

The damage there was recently inspected by Victorian Water Minister Lisa Neville, as pressure mounts on her government to do something about what is widely acknowledged as an unsustainable water trade.

“Everything we’ve done to improve the Goulburn since the millennium drought has been overridden by the need to get consumptive water downstream. It has put us back eight years.”

Pressure on the Murray and Goulburn rivers will increase when thousands of young almond trees reach maturity and require four times more water.

Last week the rice producer Sunrice described the escalation of almond and other permanent tree crop plantings as “illogical” and “unsustainable”.

Even the Almond Board, the peak industry body, has called for a moratorium on new plantations.

“It’s a disaster in the making. No one thought through the almond business model,” Ms Le Feuvre said.

“Victoria’s rivers don’t have the water and will have less in the future under climate change predictions.”