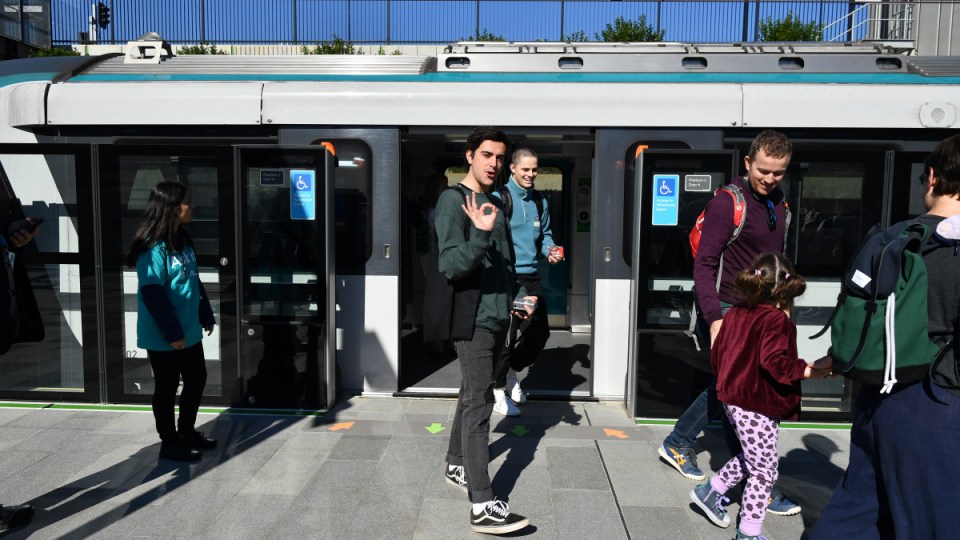 Sydney’s new driverless north-west Metro train passed its first peak-hour test on Monday morning – though not without some teething troubles.

Trains along the new line generally ran smoothly on Monday morning, though one train overshot the platform at Cherrybrook station about 8.30am.

The hiccup wasn’t as disruptive as a similar incident during Sunday’s official opening that caused a 20-minute delay.

The doors on one of Sydney’s new Metro driverless trains failed to open on Sunday afternoon, causing delays and lengthy queues, as well as marring what the New South Wales government had hoped would be a day of celebration.

On Monday, commuters posted mixed reviews on social media, with many unimpressed by the frequency of trains.

Services were promised every five minutes during peak hours, but some Sydneysiders said they arrived only every 10 minutes.

#sydneymetro your definition of peak hours needs to start way before 8am. It's 7.43am at Epping and train every 10 mins is terrible. There is hardly any standing room on the train.

Others lauded the time saved during their morning commute, calling it “life-changing”.

Travelling on #sydneymetro to work today. Left Castle Hill at 7:31am…..arrived at Central at 8:24am – a trip that usually took 1hr 45mins and $110 in parking, tolls and petrol just took 53mins and $5… absolutely life changing.

Nearly 140,000 people rode the new line between Rouse Hill and Chatswood following its official opening on Sunday – 42,000 of them in the first three hours.

When the newly-opened line reaches full operation, trains will run every four minutes each way during peak hour between Rouse Hill and Chatswood.

“I hope today will be glitch free,” she told Nine’s Today show early on Monday.

“But you’d expect in the first few weeks and even months that it won’t be perfect. We are asking people to be patient and I want to thank everybody for their patience.”

She said it would take a few months before people started using the network, as they work out how it fits in their daily routine.

More than 20,000 people worked on the $7.3 billion project – Australia’s biggest public transport project – over eight years. Work is underway to extend the line from Chatswood to Bankstown.

Later, another metro project will link greater Parramatta with the CBD.

Reports have emerged of trains taking more than an hour to travel three stops. The whole journey from Tallawong to Chatswood is supposed to take 37 minutes.

A Sydney Metro spokesperson said it was putting on extra services to clear the backlog, but on Sunday afternoon there were reports of “15- to 20-minute” delays.

Ms Berejikilian said the government had “defied all the cynics” who said the project would never happen.

“In the early days, when I spoke to local residents, the parents used to say it’d be fantastic if our kids could catch the train to university or high school,” Ms Berejiklian said.

“Some of the ones who’d been here for a long time said ‘I don’t think I’ll ever see it in my lifetime’.

“I’m glad to prove them wrong … it’s here, and it’s the start of something really special for New South Wales.”

To celebrate the opening, the NSW government offered free travel for all commuters on the line on Sunday, with huge crowds coming out to ride on the new trains.

The system has Australian-first technology, such as screen doors attached to the platforms of all of the network’s 13 stations. They open automatically after the train has stopped.

At full operation the trains, which reach speeds of up to 100km/h, will run every four minutes in each direction at peak times with the ability to run up to every two minutes in the future.

By 2024 Sydney will have 31 Metro stations and 66 kilometres of standalone Metro railway.

In their first few months, the trains will also stop at 9pm from Wednesday to Sunday to allow an ongoing review of the operations and early maintenance.