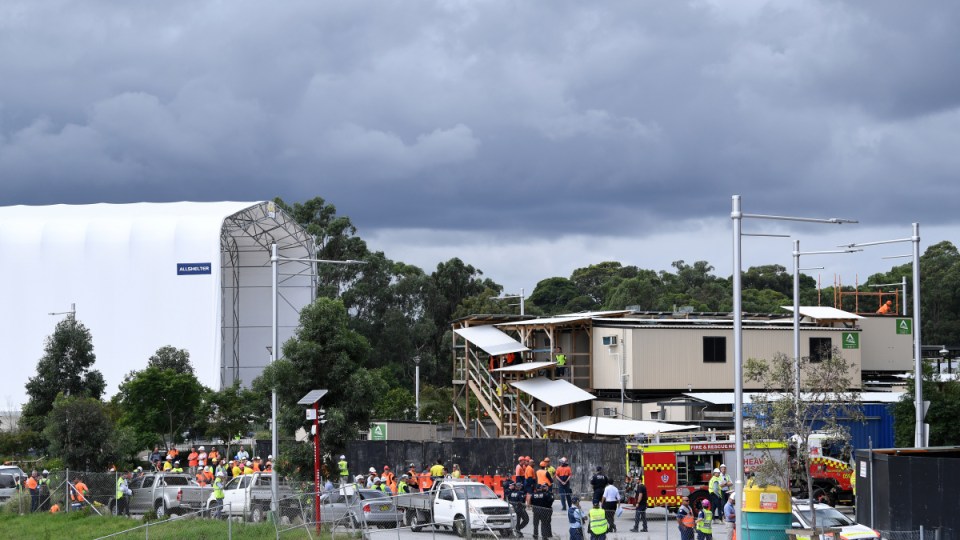 The scene at the worksite after Monday's scaffold collapse. Photo: AAP

The family of an 18-year-old apprentice killed when scaffolding collapsed at a Sydney worksite has described him as a “gentle, kind and hardworking young man” who was adored by everyone who met him

In what was the fifth workplace death on an Australian construction site this year, Christopher Cassaniti, who turned 18 last week, died at the scene after the 15-metre-high scaffolding tower collapsed about 12.30pm on Monday, trapping him under a pile of steel.

Mr Cassaniti’s father Robert said the family was devastated by the loss of their “beautiful boy”.

“Christopher was a gentle, kind and hardworking young man full of life and love for his family,” he said in a statement.

“He was adored by everyone who was lucky enough to meet him.”

As an investigation into the incident continued, video emerged showing emotional workers arguing with authorities as they frantically tried to save Mr Cassaniti and another trapped worker.

Mr Cassaniti’s devastated mother – who operates a coffee canteen around the corner from the site – was at the scene about five minutes after the accident.

A 40-year-old man was released from the rubble after the frantic search effort and was taken to Royal North Shore Hospital.

He was in a stable condition on Tuesday morning.

Another two workers were laying bricks at the top of the structure and jumped to safety.

It is not yet known what caused the scaffolding to collapse.

Video from the scene of the search shows construction workers yelling at police to “f—ing do something” while gathered around the fallen scaffolding at the Macquarie Park site.

“My brother’s down there!” one worker said. “You’re wasting time!”

Police attempted to calm the workers, with one officer telling them he understood why they were upset but urging them to be patient.

The police officer can be heard telling workers that if the wrong piece of scaffolding is moved the whole wall would collapse, comparing it to a “giant jigsaw”.

The teenager’s father said no families should have to go through their “horrendous pain” and they did not want their son to become a statistic.

“We ask that the government step in and take immediate action and implement stringent measures regarding safety on construction sites,” Robert Cassaniti said.

“Crucial safety checks and procedures need to be at the front and centre of every construction site.

“We await the outcome of the investigation as to what went wrong.”

Workers held a minute’s silence for their 18-year-old workmate, and work was halted at the site on Tuesday as a mark of respect.

The stoppage came as SafeWork NSW began its investigation into the incident, with union officials questioning how this could happen in 2019 on an Australian worksite.

“It shouldn’t happen,” he said.

“It’s very early days in the investigation, and until we get to the bottom and the roots of the cause, we don’t want to speculate on anything.

“But look, it’s not common. If any scaffold is built correctly, this doesn’t usually happen.”

“The union has arranged counsellors,” he said. “Unfortunately [they] get called to these matters all too often.

“This tragedy in particular is causing a lot of trauma and grief right across Australia.

“When you see a young man, just turned 18 on the weekend, killed in these terrible circumstances … we just feel for his family.”

Mr Noonan said the union would monitor the investigation on behalf of its members.

The builder, Balmain-based Ganellen, released a statement describing the scaffolding collapse as a “tragic incident”.

“In 20 years of operation we have never before had a fatality on site, so this incident is devastating,” the company said.

SafeWork NSW said it was employing “significant resources” to fully understand how the incident occurred.

“It is expected that an investigation could take some time,” a spokeswoman said.

“SafeWork inspectors will work through the complexities … [and] a report for the coroner will be prepared.”