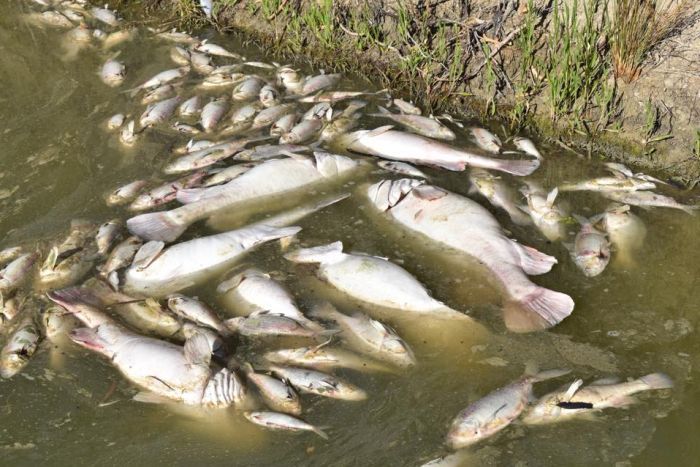 Dead fish in the Darling River in January 2019. There are fears of more deaths this summer. Photo: Facebook/Rod Mackenzie

Up to a million fish have died along a 40-kilometre stretch of the Darling River in far west New South Wales, in an event the State Government has described as “distressing”.

The mass killing at Menindee, near Broken Hill, came after a similar incident in the same part of the river less than a month ago.

According to the NSW Department of Primary Industries (DPI), toxic blue green algae is again to blame.

Native species including Bony Bream, Murray Cod and Perch, are among those affected.

“I’ve never seen two fish kills of this scale so close together in terms of time, especially in the same stretch of river,” he said. “In both cases it’s when the algal bloom has been disrupted.

“The first time due to a storm, and in this case, by the cold front that went through.”

Drought to blame for ‘distressing’ kill

Rapid shifts in the water temperature at the weekend killed much of the algae in the river system.

When the plants die, they decompose and siphon oxygen from the water, suffocating the fish.

Locals claim Murray Cod over 50 years old and weighing up to 40 kilograms have died in the event.

“The government needs to adopt a whole-system approach to water management in the Darling River,” she said.

A spokesman from the Department of the Environment and Energy denied the fish kill was due to water mismanagement in the Murray Darling Basin.

“A fish kill of this nature is always very distressing but the causes are directly related to the current drought and cease-to-flow conditions,” he said.

The Department said only major rainfall across the upper Darling catchments would be able to provide the flows needed to cleanse the river near Menindee.