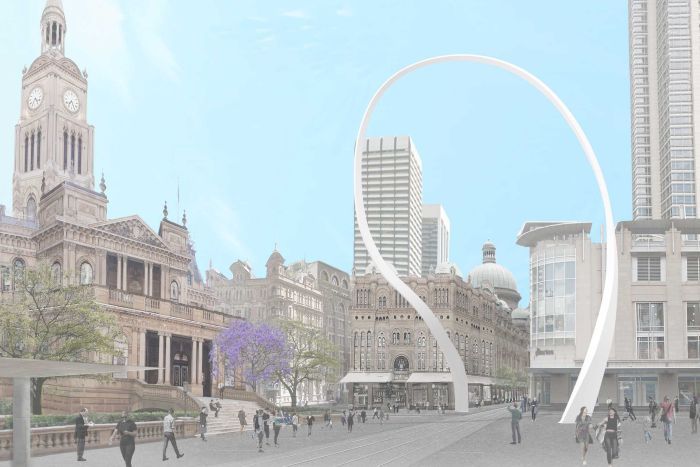 The controversial project has been referred to as "a big tapeworm". Photo: City of Sydney

Sydney’s controversial Cloud Arch is facing the axe, with backers blaming the equally divisive Light Rail project for killing the sculpture before it gets off the ground.

The 58-metre-high steel archway, which was expected to be installed in 2019, would have risen above Sydney’s Town Hall and the Queen Victoria Building.

The arch was originally estimated to cost $3.5 million but the price ballooned to $11.3 million earlier this year, prompting shock jock Alan Jones to allegedly insinuate the project’s champion, Lord Mayor Clover Moore, should be hanged from its beam.

Cr Moore defended the project, but a report to be tabled at next Tuesday’s council meeting recommends the arch be deferred indefinitely because Spanish light rail builder Acciona repeatedly “denied access” to install the footings.

The report recommends “council cancel the proposal for the contract in relation to the tender for the fabrication and installation of Cloud Arch” until the light rail project is completed.

The denial of access to the artwork’s proposed footings became a “significant challenge” for the artwork’s supporters despite an agreement between council and Transport for NSW.

“The city undertook significant work to redesign footings to try and reach agreement. But despite support from Transport for NSW, Acciona’s actions have ultimately blocked all solutions,” a council spokeswoman said on Thursday.

“The many redesigns delayed the project and increased the cost of the footings, including the cost to install them, which has become more complicated with each option.”

The massive cost is now an untenable use of public money, the spokeswoman said, and further cost increases may arise if the project pushes forward.