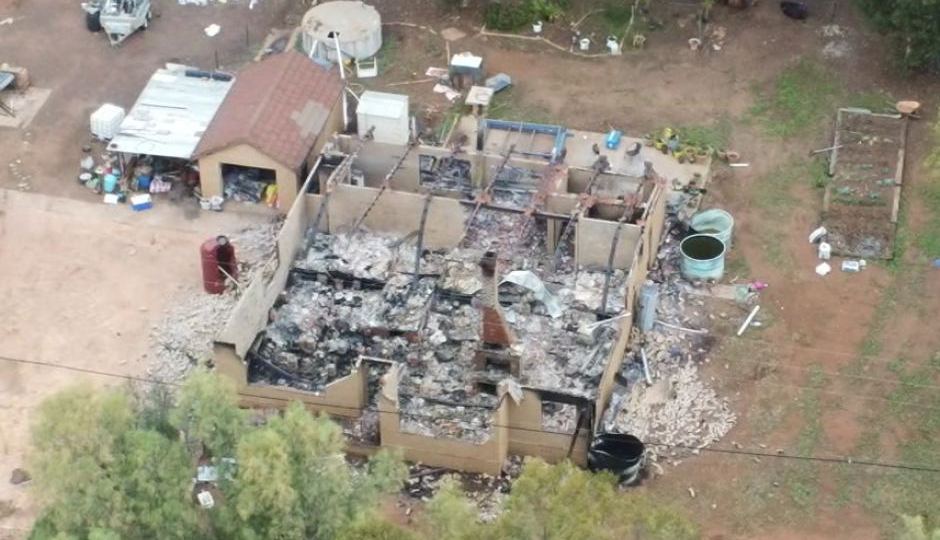 The house was burnt down after two armed men allegedly stormed the property and assaulted a man inside. Photo: ABC

Three of the four people who went missing after a domestic incident in Ootha, in central-west New South Wales, have been found.

Police have serious concerns for the safety of the second woman, 41, who they currently believe to be with a man.

Two other men have been arrested near Sackville and taken to Windsor police station.

NSW Police said this morning two men armed with a shotgun, a knife and an axe assaulted a man in a home on Henry Parkes Way, Ootha and knocked him unconscious.

When the 68-year-old regained consciousness, the house had been destroyed by fire and he could not locate the other four occupants.

Police are searching for a man who they believe was in a relationship with the 41-year-old woman.

Chief Inspector David Cooper, from Parkes Police, said the house was “well alight” when emergency services arrived at the property after 11am.

“Police located a male a short distance away who appeared to have sustained some injuries as a result of an assault,” he said.

Police are searching for the four missing people, saying there is serious concern for their welfare.

Authorities are on the lookout for a 1998 green Toyota 4WD, with NSW registration CD98XE, which was seen at the property.

“There is a vehicle of a interest, a green troop carrier-type vehicle, which we believe may be connected with this matter,” Chief Inspector Cooper said.

“There’s currently a ‘Keep A Look Out For’ across the state for that vehicle and [we are] hoping that the occupants of that vehicle may be able to assist us with [our] inquiries.”

It is believed the two men had travelled to the Hunter region or the Central Coast.

Police urged people to not approach the vehicle or the men, but contact triple-0 immediately.

The man who was assaulted in the house has been airlifted to Orange Base Hospital in a critical condition.